COLLEGE STATION — Prior to Mission Veterans’ Pool G finale against Klein Collins at the State 7-on-7 Tournament at Veterans Park and Athletic Complex on Friday afternoon, the trash talk had already started.

Once a couple Collins players saw they’d be playing the Patriots, who are often smaller than their opposition, in a battle of unbeatens for a chance to win the pool, two Collins players approached the end zone during warmups. Speaking to their own supporters, the players joked Collins should receive a win and Mission Veterans should forfeit, being that Collins appeared to have a physical advantage.

Looks proved to be deceiving though, as Mission Veterans stunned Klein Collins 31-27 with a go-ahead score coming on the final play of the game.

“Coming from the Valley, they think we can’t play, but I’m proud of my guys coming out here and doing what we do,” Mission Veterans quarterback Rick Reyna said.

Trailing by two with under one minute to play, the Mission Veterans defense made a stand and gave the ball back to Reyna and company.

With one last chance, Reyna heaved the ball to the right front pylon marker and receiver Marco Polo Cavazos outjumped and outmuscled a Collins defender, coming down with the ball and walking into the end zone.

“It felt like a dream. I saw it in the air, I knew it was coming down and I knew I had to come down with it no matter what,” Cavazos said. “… Everybody was doubting us, telling us we’re not going to make it far, but these kids, they come out here and put their hearts in. They put that work in and it shows. We want this bad.”

The victory clinched Pool G for Mission Veterans, which went unbeaten in three games. The Patriots’ two other pool victories came in a 33-18 beatdown of Prosper and 19-13 win over Buda Johnson.

The Patriots are only the second team in Rio Grande Valley 7-on-7 football history to go 3-0 in pool play at state, joining Sharyland Pioneer in 2019.

Mission Veterans football head coach David Gilpin told his team he was proud of the passion, energy and commitment they showed all day in College Station.

“What a stop by our defense to give us a chance. That was the only opportunity we had, and we had to score in one or two plays, it turned out to be one play and it was good enough,” Gilpin said.

Mission Veterans, the lone RGV team playing in today’s Division I championship bracket, is set to clash against Midland Christian at 8:45 a.m. today.

Meanwhile, Mercedes played three tight games in Pool F. But with a spot in the championship bracket up for grabs and Alvin Shadow Creek standing in their way, the Tigers failed to pull out a victory, falling 26-19. Mercedes picked up a key 20-19 victory against Cedar Park, as Tyrell Treviño brought in a touchdown pass from quarterback Mike Cisneros.

“We were just working going into that play and we just capitalized. We just had to keep our heads up and keep going,” Treviño said.

Next for Mercedes is El Paso Eastlake at 8 a.m. in the consolation bracket.

Edinburg North finished 0-3 in Pool B with losses against Colleyville and the Woodlands, but nearly upset Hutto in their final game of pool play 33-27. The Cougars will face Cy Falls at 8 a.m. today in the consolation bracket.

La Feria, which opened play Thursday in the Division II state tourney, saw its time at College Station end in Game 1 of the championship bracket after a 43-42 loss against Kaufman. The Lions finished 1-3 overall.

After dominating at the Mid-Valley State Qualifying Tournament last weekend to punch their tickets to state, Harlingen High and Harlingen South had their work cut out for them at the state tourney.

Their crosstown rival Harlingen South managed to pull out one win in Pool P play with a 13-8 victory in a defensive slugfest against Cy Fair. 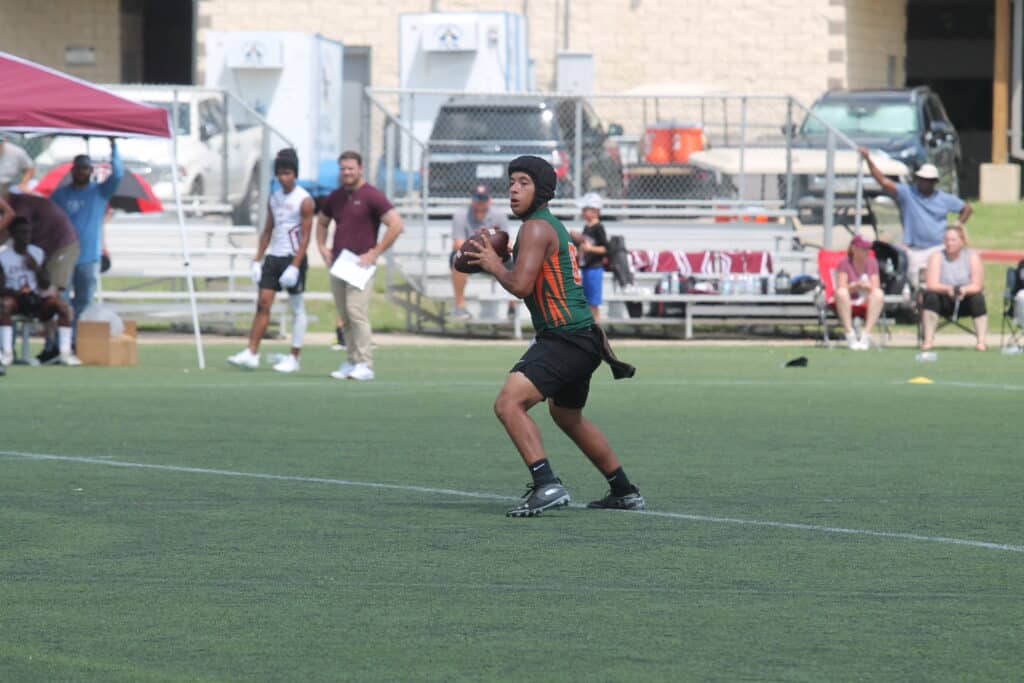 Hawks quarterback Xander Caceres delivered the game-winning touchdown pass with five minutes left in the second half and the South defense stymied Cy Fair to force a turnover on downs to secure the victory. Harlingen South, who suffered pool losses to Austin Westlake 33-20 and Denton Braswell 35-13, head into the consolation bracket for an 8 a.m. matchup against Coronado.