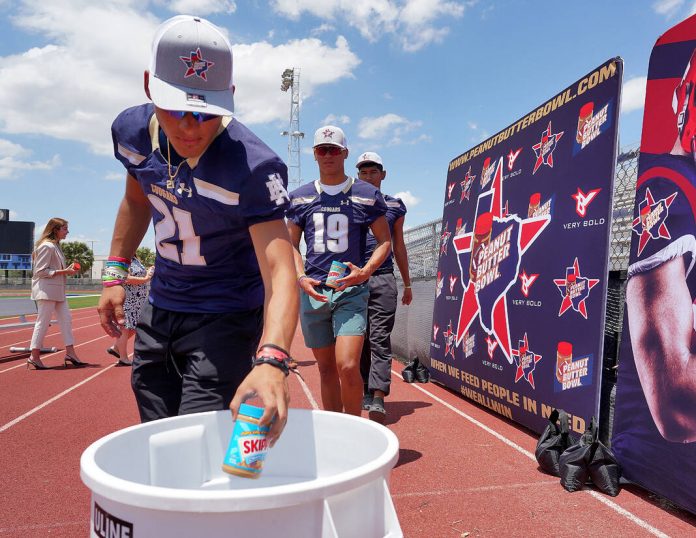 EDINBURG — Edinburg North and Ednburg Vela are set to kick off the 2022 football season with an intra-city rivalry game between the Cougars and SaberCats on Aug. 26 at Richard R. Flores Stadium in Edinburg.

While the game will have one winner, the community and Food Bank of the Rio Grande Valley will be the biggest beneficiaries as the season-opening contest was designated as a Peanut Butter Bowl during a news conference Thursday at Flores Stadium.

North and Vela school supporters and community members are encouraged to collect and donate jars of peanut butter for distribution to the Food Bank of Rio Grande Valley to help feed people in need. Donations of $2 per jar may be made online at peanutbutterbowl.com, and jars can be delivered to the schools’ athletic offices during the week of the game.

North and Vela are among 40 high schools and communities throughout central and south Texas participating in Peanut Butter Bowls in their season openers this year.

Nearly 100,000 jars-worth have been donated at games in the years since San Antonio Brandeis and San Antonio Johnson High Schools designated their 2016 game as the Peanut Butter Bowl, the first area high school game with a cause. Edinburg Vela head coach John Campbell, who coached in San Antonio prior to taking over the SaberCats’ program, thought it would be good to bring the idea to the RGV for the first time.

“It’s pretty simple by going and taking the time to donate a jar of peanut butter or making a small donation, it can be done in conjunction with attending the game. Ultimately, it goes back to serving those of us that are in need in our own community, and it’s in the spirit of competition,” Edinburg Vela head coach John Campbell said. “Obviously, there’s going to be a competitive deal. Can the North community get more donations than the Vela community, so it’s a friendly rivalry that all goes back to a good cause. It’s going to be something new, and it’s got an opportunity to be something that continues to grow.”

Said Edinburg North head coach Damian Gonzalez, “Anytime that we can use sports as a platform to do bigger and better things, I think it’s a huge plus. What better way to do it than against our crosstown sister school in Edinburg Vela? The community always gets more excited for the inner-city games, and there’s going to be quite a few people out there.”