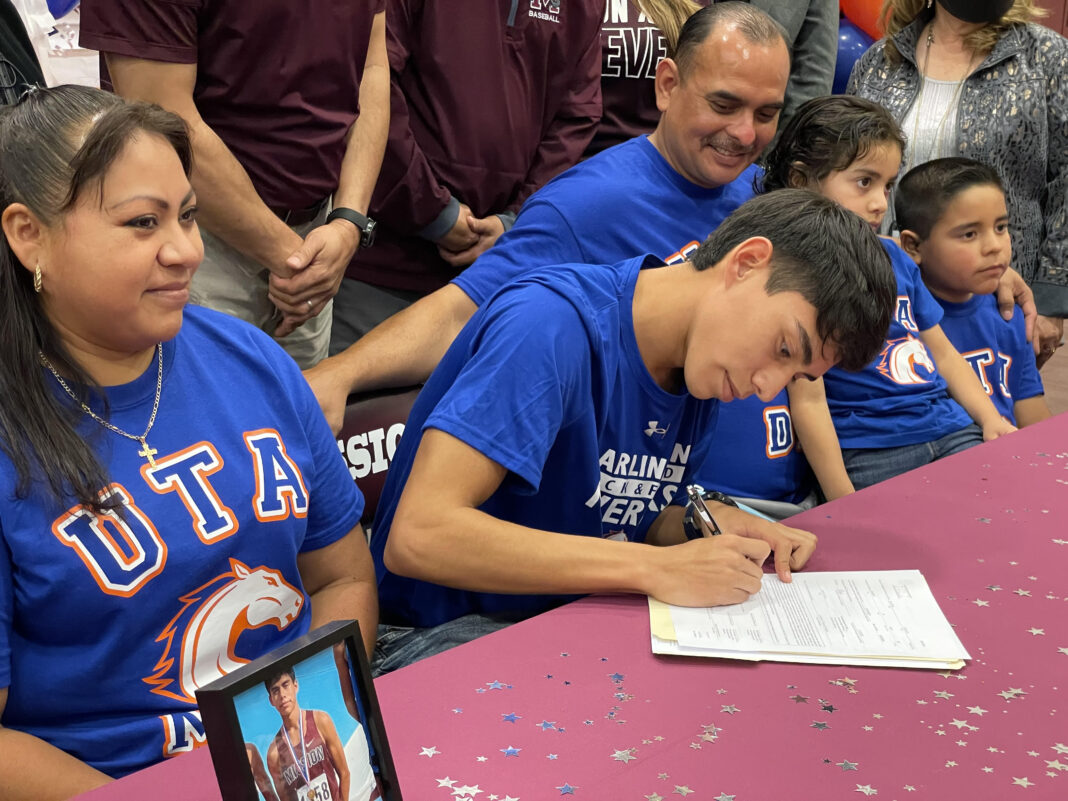 “My mind is still trying to process it all,” Aguirre said. “It’s a big moment. I’m not too sure how to feel. I’m the first one in my family to go off because of sports. I’m leaving home and it’s just a big deal.”

Aguirre has been the heart of the Eagles’ cross-country team for the past four years, Mission High head coach Elias Blanco said, earning a spot on the varsity squad as a freshman.

By his sophomore year, Aguirre and his head coach both thought he was capable of turning running into an athletic scholarship.

“When he was a sophomore during track season, right before COVID hit, we discovered his ferocity, his aggressiveness and his willingness to do whatever it took to be the best,” Blanco said. “Right before COVID hit, he had just set Mission High records in the mile and two mile. He ran out of his mind. Watching that, that was his coming-out party and I’m never going to forget that.”

Aguirre has left his mark as one of the top cross-country runners in the Valley, finishing as a four-time regional qualifier and a two-time state qualifier, while also earning the District 31-6A individual crown as a junior.

He capped off his decorated cross-country career with a 21st place during the Class 6A state meet Nov. 6. Aguirre also set a personal-best time of 15 minutes, 30 seconds during the Harlingen ISD Invitational on Aug. 28.

“He is a very deserving athlete,” Blanco said. “He does everything the right way. It’s very fitting to see what he’s doing at this level. I’m a little sad because this means he’s going to graduate. But it’s been such a joy to work with him these four years.”

His favorite part of running for the Eagles has been the support of his family, coaches and community, Aguirre said, feeling the same type of environment during his talks with the coaches at UT Arlington, leading him to the decision to sign with the Mavericks.

“The team reminded me a lot of my time that I have now,” Aguirre said. “It’s like I was at home. My favorite part of running here has been the support and the team in general. Everybody is really loving and pushing each other to be the best. I don’t think that’s something that you can replace.”

Strong shooting from behind the arc lifts UTRGV over HBU