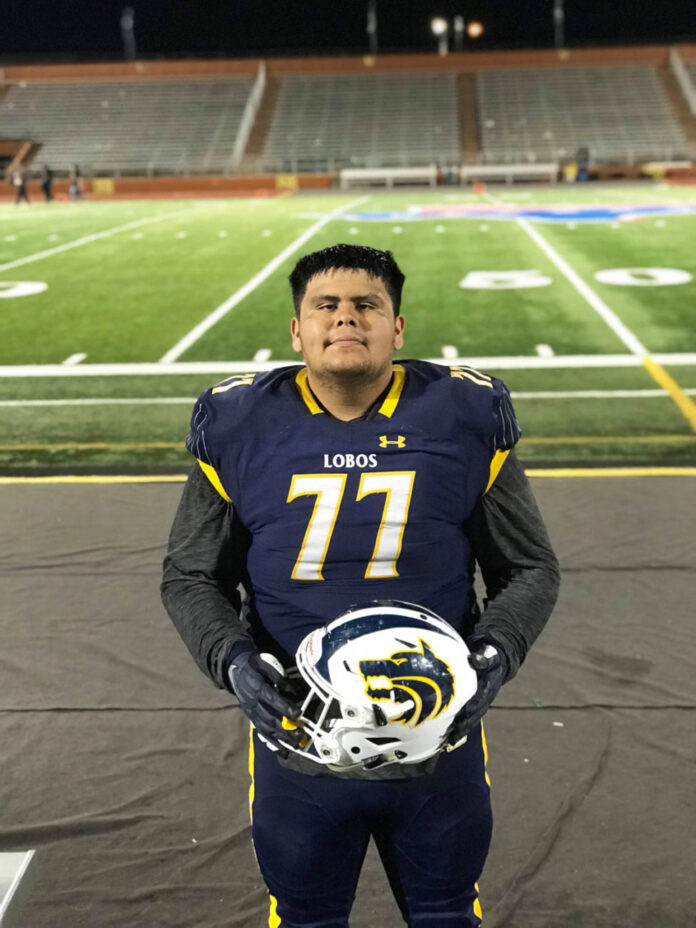 Santiago “Sonny” Castillo filled a big role for the Brownsville Lopez football program, and not just because the 6-foot-2, 315-pound offensive lineman was a presence on the field.

Castillo went from being a 5-year-old playing touch football with friends to a three-year starter and three-year captain for the Lobos. Lopez coach Armando Gutierrez said Castillo was like a coach on the field and called him the “line general” because of his football IQ and leadership abilities.

With the encouragement from his coaches and family, who saw the potential in Castillo before he did, the recent Lopez graduate worked hard throughout his career to chase the dream of playing college football.

On Aug. 5, Castillo made that dream come true as he signed a scholarship to play for Mount Marty University in the Great Plains Athletic Conference in the NAIA. He’s part of the university’s first football recruiting class and will be playing under coach Mike Woodley as “a new era in Lancer Athletics” begins.

“I was filled with so many emotions (when I signed). I was excited, happy, thankful, relieved that I would be able to continue to play the game I love so much, and even a bit nervous,” Castillo said. “This is something I had dreamed about when I was a little kid throwing the football with my neighbor and friends. Words cannot explain what it means to me to receive a big opportunity.”

On Aug. 15, Castillo moved to Yankton, S.D., and will have his first practice with his new team Tuesday. He plans on becoming a football coach in the future, a career path Gutierrez — who once told Castillo, “‘Sonny, if you ever want a job, let me know’” — thinks will be a good fit.

Castillo is excited for this new chapter.

“It was hard watching my family leave back home, especially with home being so far away. But it had to be done, and I’m OK now,” he said. “I am very excited. I’m looking forward to making new friends with my teammates and classmates, creating new relationships with my coaches and teachers, and being part of a new family here at MMU. And especially having the opportunity to continue playing the game I love.”

Gutierrez said Castillo is the first football player to sign with a college since he moved to Lopez in 2018. While coaching in Denton for many years, Gutierrez helped a lot of athletes advance to the college ranks and even to the NFL, and he said he knew Castillo had what it takes to make it, too.

“I remember him being one of the first ones that came up to me and said, “Whatever you need, I’m here. I know we’re young, but we’re willing to learn and we’re happy you’re here,’” Gutierrez said. “He has that ‘it’ factor to where he studies the game past the game. He truly watches film. I know all kids watch film, but he told me, ‘Coach, there’s a difference between watching the film and studying it,’ and absolutely there is.

“I am extremely proud of him. He’s my first kid going from down here in Brownsville, and it’s a huge accomplishment, a huge honor,” Gutierrez continued. “I’m just extremely proud of him first, and our coaching staff. They’ve worked with him, other coaches that were here before I was. And his family, because they’ve been great and very supportive.”

One of the coaches Castillo thanked for helping him through the recruitment process was offensive line coach Kenneth Rubio. He said Rubio got him in touch with Mount Marty and other programs as he pursued an opportunity to play. But he also had an army of supporters in his corner.

“So many people have helped me on this journey, too many to say in fact,” Castillo said. “But mostly my mom and dad, brothers and sisters, other family and friends, coaches, teachers and especially God. Without Him none of this would have been possible.”

Castillo will remain on the offensive line as a guard for the Lancers. Gutierrez said the intellect and passion Castillo showed while laying a foundation for a young Lopez line will help him make the jump to the next level.

“It’s his acumen and his work ethic; he has one like no other. He just goes and goes and goes. He has that acumen that I know he’s going to succeed in whatever he does,” Gutierrez said.