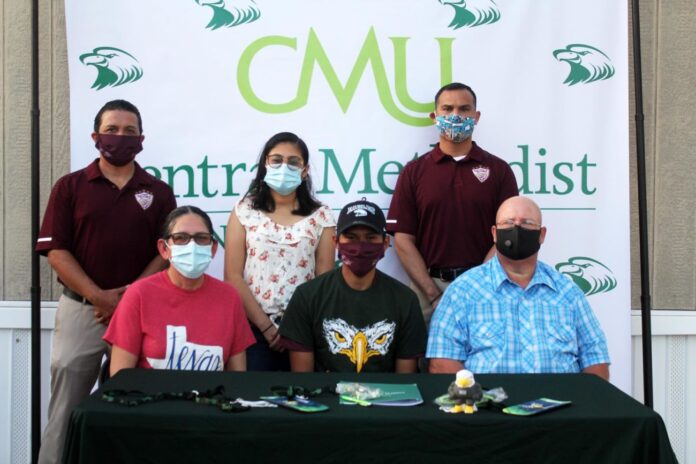 Even with a Los Fresnos mask covering much of his face, Andderson Rocha’s ear-to-ear smile was undeniable as the Falcons midfielder celebrated a big accomplishment Tuesday.

Rocha signed to play college soccer for Central Methodist University during a small ceremony outside his home. Amos Salas, a recruiter for CMU, said he got chills watching Rocha sign because of how humble and grateful he was for the chance.

“I’m just excited and very thankful for the opportunity,” Rocha said. “I want to thank my coaches for trusting me to play. And my parents, my uncle, my aunt, my friends for always supporting me. Hopefully I can prove myself over there and earn a spot and show what Los Fresnos is made of.”

Los Fresnos assistant coaches Jaime Longoria and Michael Garcia both expressed their confidence in Rocha’s abilities and called him the ultimate student of the game.

Rocha, a District 32-6A first-team midfielder, made an immediate impact in his first year on varsity and was a crucial part of the Falcons’ success, which included their first district title. Rocha’s efforts earned him The Brownsville Herald’s All-Metro utility player of the year award.

“He was a great asset to the program. He’s very disciplined and very committed,” Longoria said. “The mindset he has on the field, about what to do and when to do it, that’s key for his position, and he can play multiple positions.”

Garcia added: “Without him, I don’t think we would’ve been able to win district. He was such an important piece. When you’re up in college, all the players are going to be strong, physical, talented, and he’s going to fit right in. But what’s going to put him over those players is his intelligence. He knows the game very well.”

Falcons head coach Michael Miller was out of the state during the ceremony but said he is proud of Rocha for reaching this milestone. He praised Rocha for working hard to go from a JV Light player to quickly earning a starting spot this year.

“Throughout his four years in the Los Fresnos soccer program, Andderson has shown more improvement than anyone else,” Miller said. “I have not coached a player more mentally prepared to play at the next level as Andderson. He is coachable, studies the game and looks to improve every day. As a coach in this time, it is great to hear some good news, and I could not be more excited for Andderson.”

Rocha plans to study computer science while playing for the Eagles in Fayette, Mo. His high school career didn’t end how he wanted due to the COVID-19 pandemic prematurely ending the season, but he’s happy to start a new career under CMU coach Alex Nichols.

“I always said, ‘God always has a better plan for you,’ so this is an awesome opportunity since we were cut short for playoffs,” Rocha said. “This is like a reward, and I’m just very thankful.”