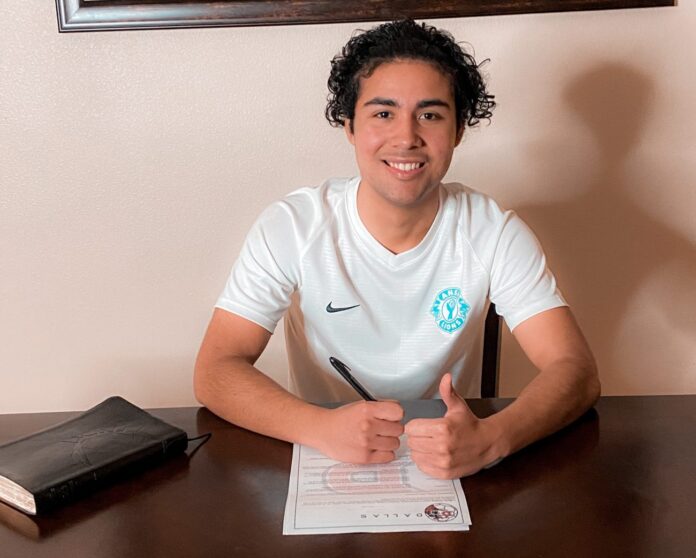 Marko Garibay Jr. didn’t have an ideal senior year, as his final season with the Hanna Golden Eagles was cut short due to an ankle injury and COVID-19, but he has a bright future ahead.

Garibay Jr. signed his intent to play college soccer for Dallas Christian College on June 3 at his home with his parents and sister by his side and extended family watching via Zoom. He will be playing as a center forward and midfielder under coach Dan Mariscal alongside some fellow Rio Grande Valley talent.

“The first thing that I thought was thank God above everything. It was shocking because it’s kind of hard to get a scholarship right now since we’re in a pandemic, but it’s a good feeling,” Garibay Jr. said. “All the hard work paid off. It has been a great journey.”

Garibay Jr. began his soccer career when he was in elementary school and was coached by his dad, Marko Garibay Sr. His dream as a child was to become a professional soccer player, and he still hopes he can improve while at Dallas Christian to earn that opportunity.

“One day I came home from school and I told (my dad) I wanted to play soccer, and he just got so hyped,” Garibay Jr. said. “I gave him the idea to make a youth soccer team. We would lose every game, and I wasn’t very good. But still every practice, every training, I always enjoyed it, and it did take a lot of patience but throughout the years I started getting better.”

The consistent training earned Garibay Jr. a spot on Hanna’s varsity roster as a freshman. Coach Reyes Prado called him a hard worker and a natural leader who lets his actions on and off the field do the talking.

Garibay Jr. said the highlight of his Hanna career was the special run the Golden Eagles made in 2019. Hanna advanced to the Region IV final for the first time in six years, and Garibay Jr. played a big role in that accomplishment. Prado said Garibay Jr. scored in every playoff game and called that postseason performance the highest point of his time in the program.

“It’s always very rewarding and a very proud moment when they get to sign to the next level and display their abilities. I’m very happy for him and his family,” Prado said. “He’s a young man that knows what he wants, and he’s shooting for the stars. I wish him the best and, knowing him, I know he’s going to work his behind off to be up to par with whoever he’s playing with.”

Along with playing at Hanna, Garibay Jr. is a member of All Nations Sports Academy Brownsville, and he thanked the organization for helping him get to the next level. He said the soccer academy took him to college identification camps so he could get exposure to college coaches. He fielded interest from a handful of schools before Dallas Christian offered him a scholarship.

Garibay Jr. plans to major in business marketing. He said he enjoys studying and is just as excited to pursue a degree as he is to continue playing soccer, which he credits to his parents, who always pushed the importance of a higher education.

“I want to get as far as possible with soccer, and I feel like Dallas Christian College is a great start for me,” Garibay Jr. said. “My parents, my older sister, they all push me and give me advice. They taught me respect and all the good lessons for life, so I’m very thankful for my family.”