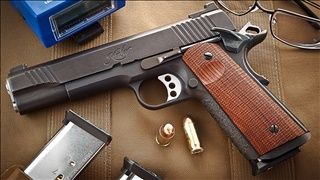 Gun ownership in Texas is more than a right, it’s a tradition, and arguably part of our state identity. In this state guns aren’t only thought of as a means of protecting ourselves and our families; our rich supply of game, ranging from majestic deer and sheep to waterfowl make the state a popular destination for hunters, including those who come to the Rio Grande Valley to harvest dove, ducks, deer and Nilgai, as well as other game.

Obviously, therefore, any gun control in this state likely will be minimal. That doesn’t mean, however, that reasonable controls shouldn’t exist.

Lt. Gov. Ken Paxton has said that he plans to bring a bill before the Texas Senate this week that would allow most adult residents to carry handguns without the need for a permit.

The “constitutional carry” measure, House Bill 1927, already has passed the House of Representatives and a specially created Senate Committee on Constitutional Issues. Paxton has admitted that the bill currently doesn’t have the votes to pass the full Senate, but he hopes minor tweaks to the bill will bring more senators into the “aye” column.

Some lawmakers’ reluctance stems from opposition voiced by law enforcement organizations and some gun ownership groups.

“These bills remove virtually every safeguard currently in place to ensure that dangerous individuals are prevented from carrying handguns in public,” Blanco Police Chief Scott Rubin, who is president of the Texas Police Chiefs Association, testified during a hearing in the Senate constitutional committee.

Proponents of the bill say the background checks people must take in order to purchase weapons should be enough to weed out the bad guys.

However, unlicensed carry also would eliminate the current requirement that licensed owners pass a gun safety course and show knowledge of and proficient use of their weapon.

“What is going on out there that we need to overhaul a system that works?” Kevin Lawrence, executive director of the Texas Municipal Police Association, asked in an Associated Press article last week. “We are fine with law-abiding citizens having guns. But there are still some people who should not be allowed to carry guns in public.”

It’s worth noting that anyone born after Sept. 2, 1972, who wishes to purchase a Texas hunting license must pass a hunter education course that includes knowledge of gun safety. If assurance of such knowledge is crucial for hunters, who normally carry their weapons in remote wilderness areas, then it seems even more important for people who carry loaded weapons in populated areas.

Paxton hopes to appease such concerns by creating a free, online gun safety course. The course would be available but not required, and it would not address concerns that some people might carry weapons that they can’t handle properly or fire accurately.

Lawrence’s concerns make sense — the current handgun permit requirement doesn’t seem to have created any problems. If anything, it has helped ensure that those who wish to carry handguns can do so, as long as they know what they’re doing. We hope enough senators see the value in such assurances, and vote to keep the current permit requirement.