A new shelter for migrants in Reynosa is under construction, but organizers are in need of donations to cover related expenses.

Overnight, Mexican law enforcement began dismantling the encampment where nearly 5,000 migrants live refuged under tarps strung together, donated tents, borrowed cots and blankets spread over a plaza a block away from the Hidalgo-Reynosa International bridge. 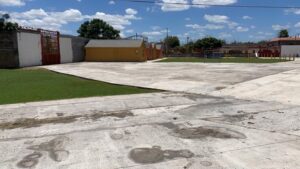 The new shelter was originally intended to serve as a COVID-19 shelter, but will likely be used for the migrants expected to be displaced by the late night developments.

Many of those living in the plaza were expelled under a U.S. public health code known as Title 42. The camp sprung up in April when only a few hundred stayed in the Mexican border city hoping for a chance to enter into the U.S. and request asylum.

While some are allowed to stay in the country, others continue to get expelled to Mexico and have contributed to the camp’s rapid growth.

Testing for COVID-19 is limited to a few who are sent to a migrant shelter or those allowed to enter the U.S. through special consideration. Otherwise, the majority are not tested.

“COVID, of course, is inside that encampment,” Felicia Rangel-Samponaro, a cofounder of Sidewalk School, a nongovernmental organization, said Thursday. “When you’re talking about so many people living in that small space, guess how often that spreads?”

The Sidewalk School had a small COVID shelter that could hold a few people, but they quickly outgrew it.

“People are getting really sick and they have nowhere to go. They’re staying in that encampment and infecting other people,” Rangel-Samponaro said.

Several nongovernmental organizations, including the Sidewalk School, Angry Tias and Abuelas, Senda de Vida, and Cuidad de Refugio, banded together to find a new space for the shelter. 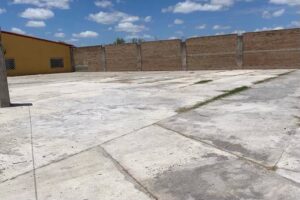 That pastor offered a large, compound space they weren’t using in their church’s fenced property for the shelter, rent-free, Rangel-Samponaro said.

This week, they agreed to start preparing it to start bringing in up to 400 migrants that test positive for COVID-19 or were living in the plaza close to someone who is sick. The stay at the shelter is optional.

Doctors will be visiting the shelter where they will offer medical attention and COVID-19 treatments. Food and shelter will also be provided.

After the quarantine period ends, the goal is to move families over to Senda de Vida where an expansion is under construction to provide long-term shelter to more families.

“The goal is to not get you back to that plaza,” Rangel-Samponaro said. “It’s not a safe place.”

However, after this week’s dismantling, it may not be an option.

For now, she’s seen migrants who get sick in the encampment and can’t go to the hospital. She hopes the shelter will give them an option that will contain the spread of the virus among the migrants.

“No one has died from it yet, but if this continues on without this kind of intervention, someone will die from this,” Rangel-Samponaro stressed.

Donations can be contributed via the Sidewalk School’s website, at www.sidewalkschool.org/donate-2, or the website for Angry Tias & Abuelas, www.angrytiasandabuelas.com/donate.