The Texas Department of Housing and Community Affairs announced on July 23 news the Housing Authority of the City of Brownsville was hoping to hear: HACB’s proposed $18.5 million project to fully restore El Jardin for a residential-commercial redevelopment has been approved for $11.8 million in 9 percent Housing Tax Credits through the state.

The money was awarded to the Brownsville Housing Opportunity Corp., HACB’s wholly owned nonprofit that applies for low-income housing tax credits. How the program works is that the developer receiving the credits (BHOC in this case) offers them for sale to investors, who can apply the credits toward their federal liability each year for 10 years on a dollar-for-dollar basis in exchange for their investment in the property.

The credits were an essential component for HACB to proceed with the El Jardin project, which involves creating 42 residential housing units on the second through eighth floors of the building, which opened as a hotel in 1927, plus two residential units on the first floor in a newer part of the building, said BHOC President Patricio Sampayo during a recent tour of the weathered relic.

The first floor of the original tower will be partly set aside for “amenity space” for residents and the remainder for leasable space, he said.

“So potentially retail, commercial, office — something that’s not tied to the residential project,” Sampayo said.

Pointing out the former kitchen and dining area of the leasable space, he said the aim is to “bring it back to life and having something that the community can advantage of.”

“It’s wide open right now,” Sampayo said. “That will be up to the board. It could be a restaurant. It could be an office or some sort of a community service-oriented organization. It just depends on what the need is and what best serves the community. With everything that’s going on downtown, who knows? That’s something the board will have to look at when the time’s right.”

A paneled wall that was erected sometime in the building’s history to create a separate lounge, and which intersects the original front desk, will be taken out, restoring the original look of El Jardin’s sprawling lobby complete with ornate columns, he said. The grounds on the East St. Charles Street side will feature a community garden, playground and walkway, which the first-floor apartments will open onto, Sampayo said. 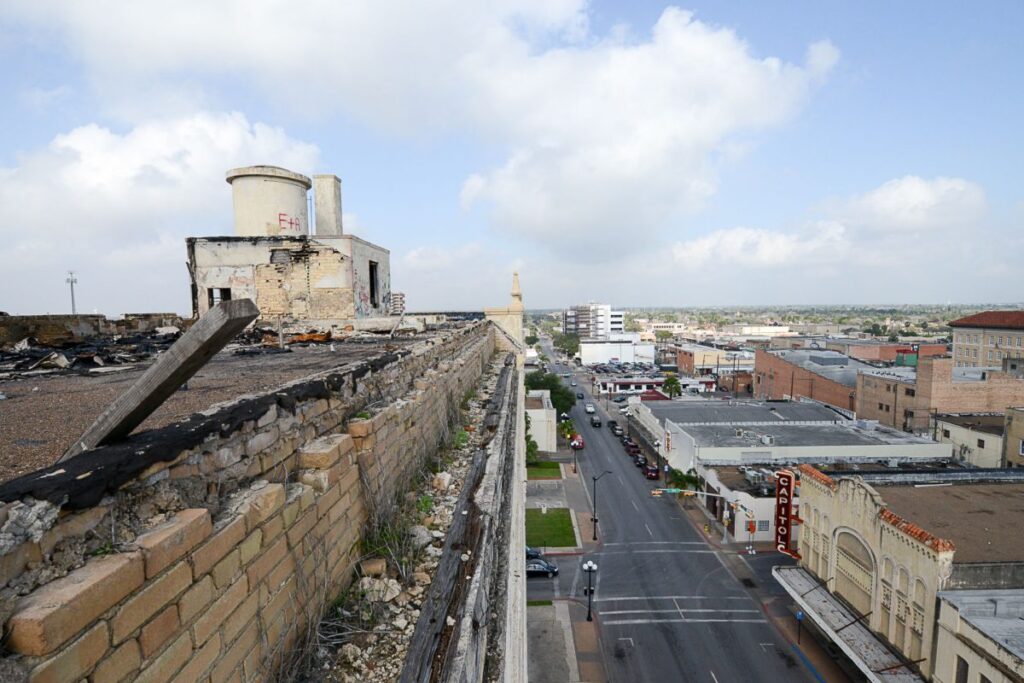 BHOC applied for the tax credits in February 2019 and HACB bought the property in November of that year. HACB first spent nearly 10 months taking a close look at the building’s physical condition, with engineers taking core samples to test the structural integrity. The second floor was entirely gutted as part of the process and so HACB could see what they had to work with.

On the upper floors the tiny rooms are in ruins, all fixtures and plumbing having been ripped out to leave gaping holes in floors and walls, though vintage Diehl fans that haven’t turned in decades still hang from many of the ceilings. All of that will be cleared away soon as the remaining floors are turned into residential units.

The $18.5 million for the project includes a $1.76 million developer fee to be paid to BHOC, which will allow the nonprofit to recover the $780,000 purchase price of the building. BHOC hopes to secure another $7 million in historic tax credits for the project.

Sampayo congratulated the HACB and BHOC teams for what he described as a remarkable achievement in securing the TDHCA credits.

“Not only will this award help preserve a critical piece of Brownsville’s history and create more affordable housing, it is a direct investment in the well being of HACB’s families and the future of our children,” he said. “My heartfelt thanks to everyone that helped make this possible.”

Carla Mancha, housing authority CEO, expressed gratitude to the TDHCA board for granting the award to the El Jardin project.

“This award will aid in bringing new life and purpose to this historic building,” she said. “Thank you for helping us help our families.”

Construction is scheduled to start in summer 2022 and be complete in December 2023.