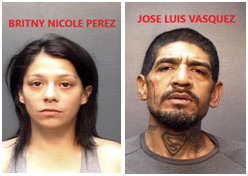 A Brownsville couple have been arrested by police and charged with causing the death of 39-year-old Jose Villarreal.

Villarreal’s body was found Aug. 13 on Father Mestas Street in West Brownsville. He had been shot.

A third suspect has been identified and an arrest is pending.

Sandoval said authorities were able to identify the suspects through interviews and evidence collected at the crime scene, Sandoval said.

Vasquez was taken into custody at the intersection of Old Military Highway and Boca Chica during a traffic stop that was conducted by Brownsville Police and U.S. Marshals Service.

Perez was located at a residence and taken into custody by the U.S. Marshals Service.

Vasquez and Perez were charged and each arraigned on one count of murder, aggravated kidnapping and engaged in criminal activity.

Sandoval said throughout the investigation the department’s Criminal Investigation Unit and the Texas Rangers “worked around the clock to follow every lead and evidence.”