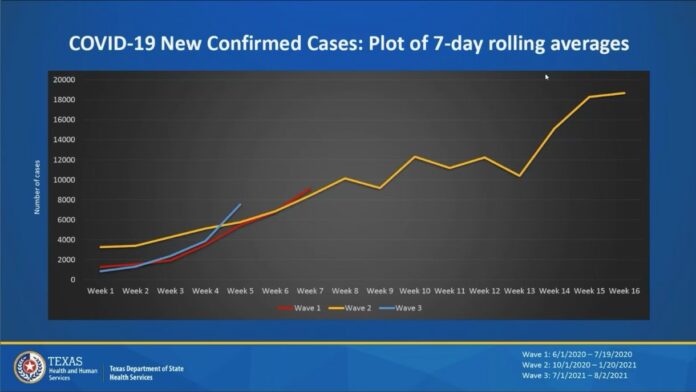 The number of COVID-19 cases and hospitalizations in Texas may not yet be as high as they were during the first or the second wave of the pandemic, but the numbers in this third wave are climbing even faster, pointing to a higher rate of transmission among the virus’s variants.

Cases and hospitalizations due to COVID-19 are rising at a sharp rate across the state to the point that they’re increasing faster than they did during the first wave of the pandemic, which peaked in July 2020, and also faster than the second wave, which lasted from October to January.

“Texas is experiencing a sharp rise in cases and hospitalizations and this has been driven by the Delta variant,” said Dr. Jennifer Shuford with the Texas Department of State Health Services during a news briefing on Wednesday.

“(The Centers for Disease Control and Prevention) estimates that more than 80% of COVID-19 cases nationwide now are due to delta,” Shuford continued, “and our preliminary data suggest that over 75% of COVID-19 cases in Texas are now due to the delta variant.”.

She pointed to trend data that reflected how the variants were driving cases and hospitalizations at a faster rate.

“(In) the third wave, we’re seeing steep increases in hospitalizations, steeper than we saw at the same point of even the first wave or the second wave,” Shuford said.

“This alarming rise in cases and hospitalizations makes it even more important for every person to go get fully vaccinated,” she added. “We know that these vaccines work, even against variants like delta.” 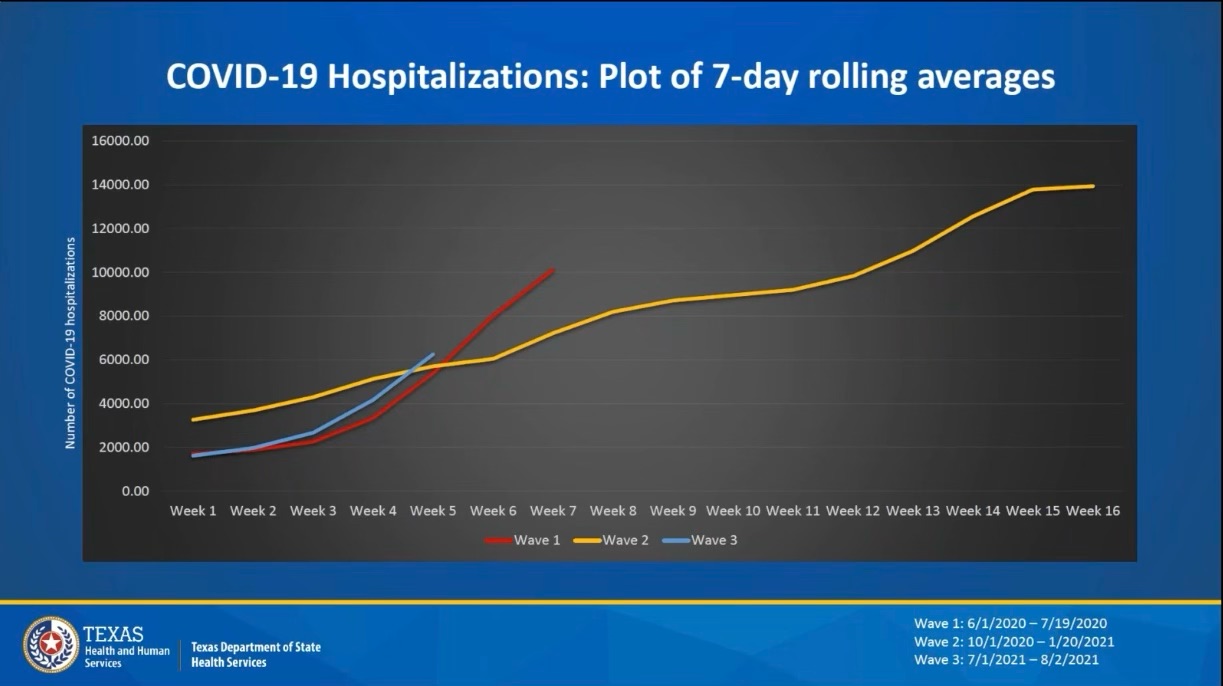 She acknowledged that the vaccines would not provide 100% protection against the coronavirus or its variants but stressed that most vaccinated people would be protected from getting sick.

“And those vaccinated people who do get sick with COVID-19 are likely to have a shorter, milder illness,” she said.

The message of the effectiveness of the vaccine did appear to reach some Texans as the number of vaccine doses being administered began to steadily increase after July 4.

“We hit a low there after July 4, about 44,000 daily doses, and that’s gone up pretty steadily since to more than 75,000 as of yesterday, “ said Chris Van Deusen, director of media relations for DSHS.

The number of doses administered has steadily climbed locally as well.

“It really seems that people are getting the message that this is a serious situation,” Van Deusen said. “If they have been putting off getting vaccinated, now’s the time to stop — don’t put it off any longer.”

In Hidalgo County, there were 443 new cases of the virus reported Wednesday, the same day that four people reportedly died as a result of COVID-19, according to a county news release.

The number of people in county hospitals with COVID-19 climbed from 199 on Tuesday to 246 Wednesday, including 52 people in intensive care units.

The county also reported that an additional 356 people recovered from the virus Wednesday, raising that total to 93,706. There are 3,077 net active cases in the county.

The two deaths include a Harlingen man in his 50s and a South Padre Island man in his 60s, raising the county’s COVID-19 death toll to 1,715.

The county’s 100 new cases include five people from unaccompanied minor shelters and detention centers in Los Fresnos. The county now has a total of 45,068 confirmed cases.

There were 161 people who recovered from the virus, raising that total to 41,078.