BY BERENICE GARCIA AND VALERIE GONZALEZ

McALLEN — City leaders concerned with insufficient shelter space in light of a spike in migrants released by Border Patrol in McAllen are planning contingencies, though more are expected later this summer.

The number of migrant families dropped off at the Catholic Charities of the Rio Grande Valley Humanitarian Respite Center, located in McAllen, is reaching record highs.

“The numbers have been up, they’ve been a little higher,” said McAllen Mayor Javier Villalobos.

City records indicate the number of migrants released at the shelter is exceeding the capacity of 600 more consistently since the end of May. 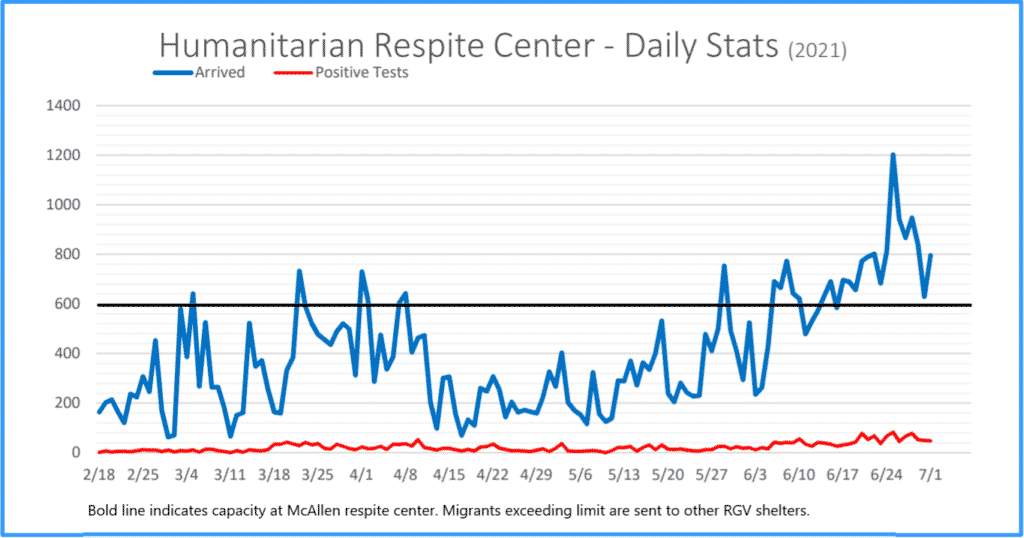 During the week of June 24 through June 30, U.S. Border Patrol dropped off a record number of 6,238 individuals seeking asylum at the respite center.

Though the capacity at the respite center is 600, migrants who exceed that limit are sent to other shelters across the Valley.

Border Patrol is also busing migrants through a private contractor to a Laredo overnight shelter, the Holding Institute.

Pastor Mike Smith, the executive director of the shelter, said they noticed an increase in migrants sent to them at the start of June when they were receiving fewer than 100 a day.

Currently, about 200-300 migrants are sent daily from the Rio Grande Valley, Smith said.

“We’re a little concerned, not really right now because of this, but if they lift Title 42 — that’s when we’re really going to be concerned,” Villalobos said.

Most migrants who enter the U.S. since March 2020 are sent back to Mexico under a federal health policy known as Title 42. It’s used to expel migrants without giving them the opportunity to request asylum if they come “from countries where a quarantinable communicable disease exists.”

Customs and Border Protection have recorded over 870,000 expulsions, so far. Some migrants, however, are allowed into the U.S., due to humanitarian exceptions or complications arising from the acceptance of certain migrants by the bordering Mexican states.

Though the date could change, the end to the policy enacted due to the pandemic is inevitable.

Once migrants can request asylum again, Assistant City Manager Jeff Johnston told the commissioners last month that they expect at least 250 more people per day will be dropped off at the center.

Villalobos said he didn’t believe the respite center would have sufficient capacity to handle the amount of people.

“If they just come drop off individuals there and the respite center can’t take care of them, I don’t know what’s going to happen,” Villalobos said. “I think it’s going to be chaotic and I think we’re going to start having issues with people in the downtown area.”

Pimentel said there are ongoing conversations addressing those concerns with a network of shelters and churches across the Valley and beyond.

“We are preparing to make sure we’re ready for those numbers to go above that,” Pimentel said. “We benefit from different parishes and churches stepping up and helping out and making sure we can place them in some of their locations, and we have several that have said yes.”

As of now, the respite center receives migrant families, mothers and children. When Title 42 restrictions are withdrawn, single adults will likely be among the released groups.

Pimentel said they will be rerouting single adults away from the families at the respite center to other shelters and churches in Harlingen, Brownsville, McAllen, San Benito, as well as Laredo and Houston. She said there are also plans to possibly send migrants to San Antonio.

Aside from space concerns, McAllen leaders are also tracking the number of positive COVID-19 cases at the center where Pimentel said they’ve seen the positive rate increase.

Over 900 migrants were placed in quarantine at area hotels on July 5, according to a report from the McAllen Office of Emergency Management. However, many of them were not positive. Pimentel said if one member of a family tests positive, the entire family is placed in quarantine for 10 days.

Pimentel said she expects testing to continue, even after Title 42 is no longer enforced.

“Right now, we really don’t, everything’s pretty orderly, business all around downtown is running smoothly,” the mayor added, “but my concern is I don’t want to affect our business owners, our residents, with an overpopulation of immigrants that we can’t quickly move.”

He said at the city level, they keep hoping the federal government would handle the issue, arguing that it isn’t a municipal responsibility.

“It’s not a solution we should reach, it’s the federal government’s responsibility,” Villalobos said. “In a sense, we get stuck with something we should never be dealing with.”