But the announcement of funds to convert that stretch of U.S. 77 at Robstown into a fully integrated I-69E is an indicator that decades of work on the massive project is progressing.

“This is a great reminder that progress is being made, and it also emphasizes the dire need for continued funding, primarily because the increase of freight traffic at each and every one of our ports of entry continues even during the pandemic,” said Sergio Contreras, CEO of the RGV Partnership and a member of the executive committee for the Alliance for I-69 Texas.

“In addition to that, we’re expecting the fruition of USMCA (the United States-Mexico-Canada trade agreement) to spur development because now the economy is back open and also there’s the need to improve the supply chain,” he added.

Economic development experts say the ambitious enhancement of existing highways from Laredo to Edinburg to Brownsville and on to Texarkana into full-fledged interstate is crucial to the future of the Rio Grande Valley and Texas.

Just south of the Robstown section, some $142 million in projects over 10 miles of U.S. 77 between Robstown and Kingsville are expected to be completed by next summer.

A 10-mile section already built to interstate standard runs through Bishop and Kingsville. Combined, that means an additional 20.6 interstate miles once construction is complete. The result will be a 31-mile interstate section between I-37 at Corpus Christi and the south side of Kingsville.

“We’re getting closer every time that they sign some of these areas on the expressway, on the highways, and I think we’re a lot closer now than we were 10 years ago, 15 years ago, that’s for sure,” said Raudel Garza, CEO and president of the Harlingen Economic Development Corp. and another board member of the Alliance for I-69 Texas. 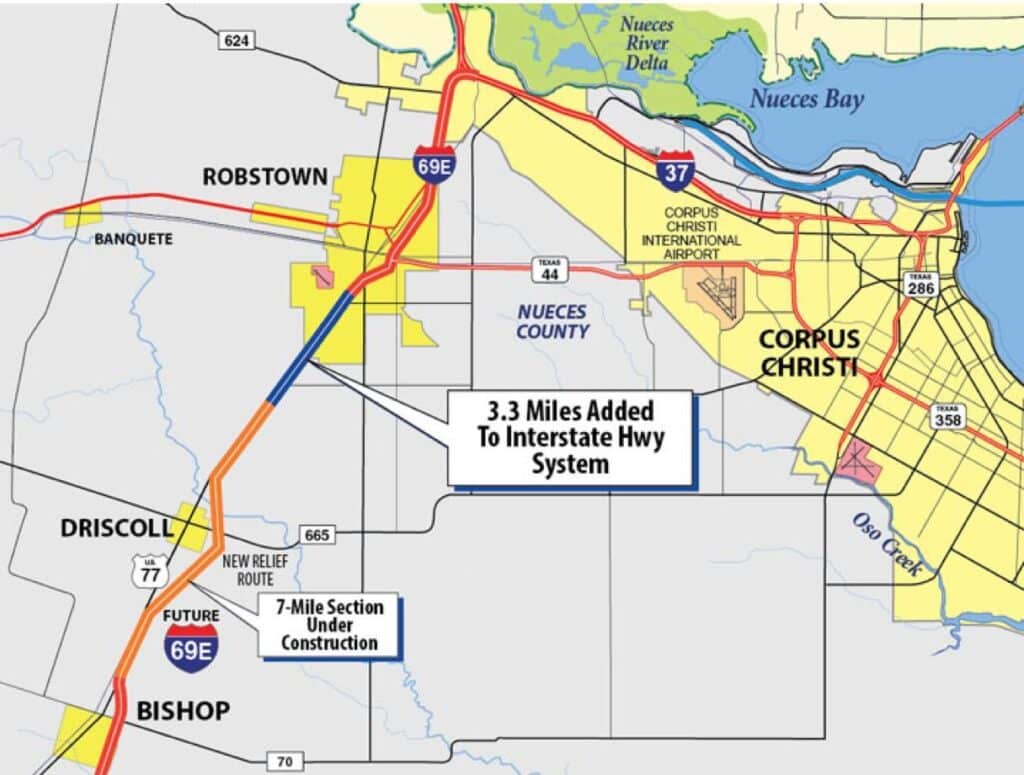 So just what does having this corridor up and running as a full interstate mean to the Valley in terms of economic development, and really, our future?

“Pretty much the question is the reason we’re engaged in this conversation,” Contreras said. “And that is to continue to drive the economic development opportunities for the local workforce, for the trade community, and also for retail.”

“Investors in either retail, leisure, travel, hotels, restaurants always look and target interstate highways for investment,” he added. “Over the years designation of I-69 has demonstrated itself as an additional factor for larger companies to invest in our local communities.”

Once the projects at Kingsville, Ricardo, Riviera and across Kenedy County are completed within the next 10 years, the result will be a seamless I-69E from Brownsville to I-37.

“A lot of people think that we’ve got enough signage out there to be recognized nationwide, but I think we’re getting there but we won’t be able to say, yes, we’re fully connected to the rest of the country in terms of the interstate highway system,” Garza said.

On U.S. 281, TxDOT’s Unified Transportation Plan includes project funding for completing most of the I-69 Central route between Edinburg and Falfurrias.

An $80 million I-69 relief route is currently under construction at Premont on U.S. 281.  The 6.2-mile freeway section will bypass the only remaining stoplight on the 150-mile stretch of future I-69C from the Valley to U.S. 59 in George West.

TxDOT has been accelerating the pace of I-69 project programming in recent years, recognizing its importance as an international freight corridor.  As I-69 sections are completed to interstate highway standards, the result will be more efficient freight movement and enhanced safety for all traffic.