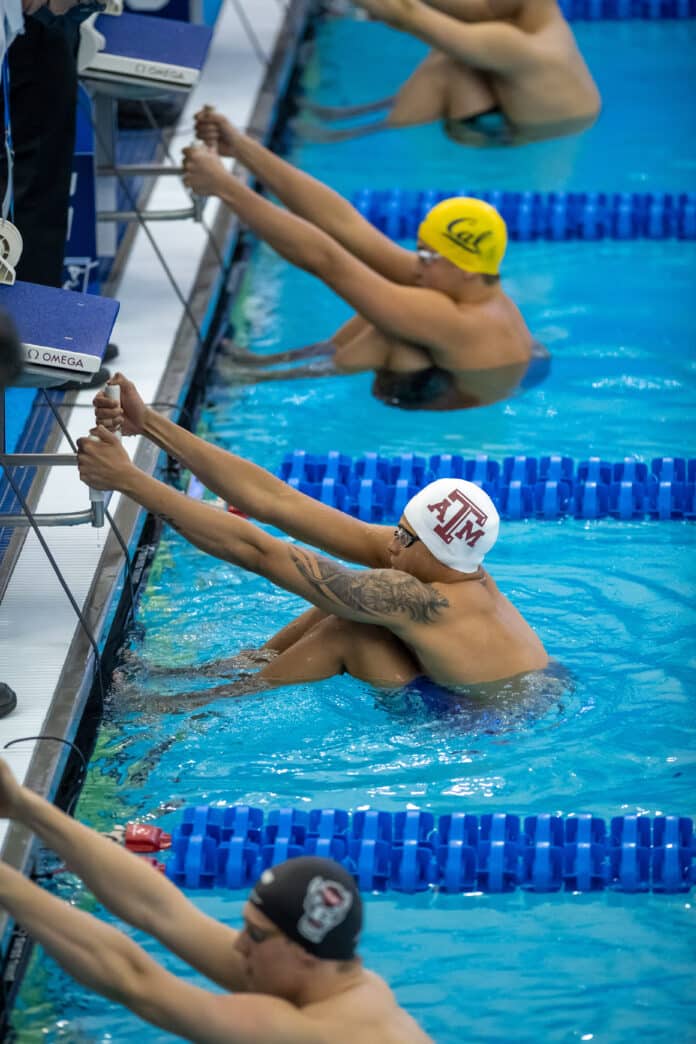 There’s not much more Shaine Casas can do to prepare for the U.S. Olympic time trials and a shot to represent the United States at the Tokyo Summer Games.

“I’ve waited long enough,” said Casas, who will be swimming in the 100- and 200-meter events, and possibly others. He said there has also been talk about swimming in the 50 freestyle, but “I would do that just to do it,” he said.

When the pre-scratch sheets were revealed earlier this week, the 6-foot-3, 160-pound Casas was listed as possibly competing in seven different preliminary events: the 200 free and 100 back Monday, the 100 free Wednesday, the 200 back and 200 IM on Thursday, the 100 fly Friday and the 50 free Saturday.

“Preparation was the entire year leading up to this. There’s not much I can do to change, except to be training to peak,” Casas told The Monitor last week. “I’ve been excited for this moment for years. This is the worst time now, just waiting. It’s so close.”

The top two finishers in each event will make the U.S. Olympic team, with the top six likely to qualify in the 100- and 200-meter freestyles to fill out relays.

“He’s a very good IMer and butterflier and could really try anything in there,” Jared Anderson, senior writer for SwimSwam.com, told The Monitor. “The Olympic trials are packed into eight days. How much do you take on? Five events? Or do you focus more on two or three to get into the Olympics.

“I think Shaine could be one of those next set of great swimming guys. He’s got a huge wing span, he’s tall and covers a lot of ground every stroke. He’s a big guy and swims event bigger. You have to eat yardage as an Olympian and he’s got the skill sets that are Olympic.”

Casas has been projected by publications such as SwimSwam and Sports Illustrated to qualify for the Tokyo Summer Games and take second in both the 100 and 200 backstroke, finishing only behind Ryan Murphy in each event.

A former University of California swimmer, Murphy won the NCAA Championship in the 100 and 200 back all four years during college (2014-2017). He also won three gold medals at the 2016 Summer Olympics in Rio, capturing the 100 and 200 back, while also winning in the 4×100 men’s medley relay. Murphy also broke Aaron Peirsol’s world record for the 100 with his relay time of 51.85.

“That thought of making the Olympics — the dream — is always there for everybody. Then, one day it became more of a realization after every single milestone I passed and starting doing well in high school,” Casas said. “Then after nationals it became more of a real thing. By the end of my freshman year and after winning nationals it was real. I started actually thinking, ‘I can.’”

In the NCAA Championships this year, Casas won three individual championships — the 200 IM and the 100 and 200 back. His time of 1 minute, 35.79 second was the second-fastest time in that event’s history, just missing the record of 1:35.73 during the 2016 NCAAs by none of than Murphy. But, for Casas, it’s rarely ever “what happened,” but more “what’s next?”

“The individual accolades are pretty impressive, but I definitely fell short on times and stuff like that, but I still got the job done — 3-for-3. Hopefully that is something that this year’s success can build on in the future. I can’t take away that it was a great meet, but I want more than a great meet, I want an excellent meet,” Casas was quoted by USA Swimming managing editor Dan D’Adonna as saying.

With all the events Casas could compete in, he may be looking at 18-21 swims if he competes in them all, which is highly unlikely. Still, he is seeded second in the 100 backstroke behind Murphy and ahead of six-time Olympic medalist Matt Grevers, third in the 200 backstroke, with the University of Texas standout seeded second, both behind Murphy. Casas is also seeded eighth in the 100 fly and 200 Individual Medley (IM), 17th in the 100 freestyle, 52nd in the 200 freestyle and 67th in the 50 free.

While he was already being heralded as one of the next U.S. men’s swimming greats, this solidified that prognostication and has set the stage to remove “next” from that unofficial title.

Anderson said what’s especially impressive to him about Casas is not only how fast he gets into the turn but also to see how much time Casas has shaved off in such short times.

“He’s really shown improvement with the kind of time he’s dropped at times, even back when he was a sophomore or junior,” Anderson said. “By the time he was a senior, he was really good and being big-time recruited and I was thinking that someone was going to be really lucky to get him.

“But then when he continued to drop the type of times he was dropping in a year, you’re going to open a lot of eyes, and he has done that.”

Casas said everything stepped into another level after winning the 19-and-under national championship at the Phillips 66 National Championships in July 2018. He followed that with a long list of accolades, including being the top point scorer and winning the Commissioners Trophy at the previous two SEC Championships.

“After winning and something like that and performing the way I did — I mean, it didn’t come out of nowhere but people didn’t expect it and I felt like a lot was born in that moment,” Casas said. “I was winning against the best and winning for Texas A&M and for me and the program.

Schedule of events that McAllen and Texas A&M standout swimmer Shaine Casas may compete in at the 2021 US Olympic Swimming Time Trials beginning today.

All finals sessions will be shown live on either NBC or NCSBN beginning at 8 p.m. Eastern Time.