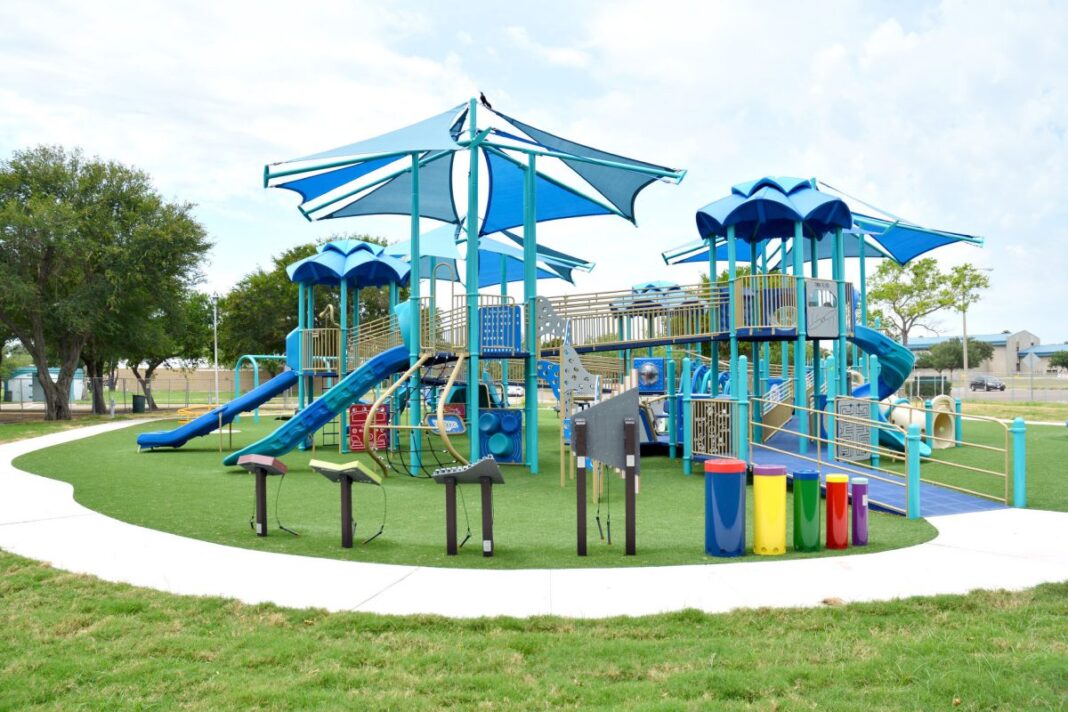 HARLINGEN — Blueprints are calling for the revamped Lon C. Hill Park to become a destination for all families — and all children.

Earlier this week, city commissioners and members of the Harlingen Community Improvement Board agreed to set aside $916,062 to build an adaptive sports field aimed at special needs children as part of the super park’s $4 million second phase.

“That’s our goal — to make the park as friendly for special needs families as possible,” Javier Mendez, the city’s parks director, said. “All of these things are kind of new for the city.”

As part of the project, City Manager Dan Serna plans to renovate a 225-foot baseball diamond by the Boys and Girls Club at the corner of Washington Avenue and J Street into an adaptive sports field featuring synthetic turf to open it up to players of all ages — including those with special needs.

“Essentially, it would have a surface that allows for a child (in a wheelchair) to participate in the activity within the field,” Serna said during Wednesday’s meeting. “We think it’s a great component to the destination park.”

“These fields are usually constructed using a poured-in-place rubberized surfacing or synthetic turf to help prevent injuries and easy maneuvering of wheelchairs and walkers,” Serna’s PowerPoint presentation stated. “Using the existing fields and infrastructure, we would modify the dugouts and bleacher areas to create a more inviting facility for any individuals with accessibility barriers.”

The adaptive sports field will help the city draw organizations such as Special Olympics and Miracle Kids of South Texas, Mendez said.

“We’re trying to attract different organizations,” he said. “We want to have some events for them.”

In the upper Rio Grande Valley, some school districts have built adaptive fields as part of their sports programs, Mendez said.

“They’re getting pretty popular,” he said.

From across the area, the adaptive sports field is expected to help draw families with special needs children to the park featuring one of the city’s award-winning all-inclusive playgrounds, sprawling mazes of play stations designed for all children, including those with special needs.

City leaders’ move to add the adaptive sports field to the super park’s second phase comes after last month’s decision to fund a $2.5 million amphitheater, which will become the destination park’s “anchor,” and a $727,950 mile-long lighted walking trail.

Amid discussions, community improvement board members, whose budget is funded through a one-eighth-cent sales tax aimed at financing quality-of-life projects, questioned whether their $5.3 million budget could fund the super park’s $4 million second phase.

In response, Serna said the city’s sales tax projections show the board’s fund balance is expected to increase by about $4.4 million through August 2023, when officials expect to complete the park’s second phase.

A tall, arched gateway opens into the destination park featuring a $279,025 entry court highlighting an entrance made up of a sprawling archway looming over stone columns.

Opening into a $554,545 center plaza, the park’s first phase showcases a large pavilion and a lighted water fountain with a 52-foot diameter.

The park’s first phase also features $587,957 worth of winding walkways leading to the pavilion, gazebos and restrooms.