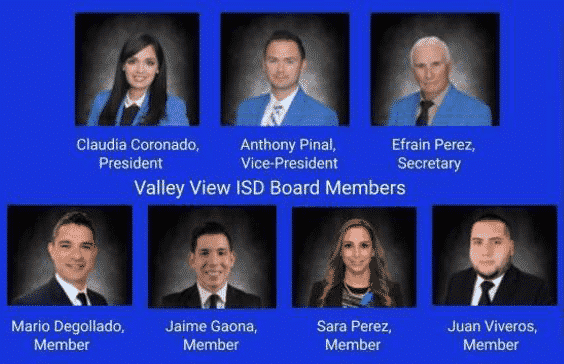 PHARR — Leadership at the Valley View school district is contemplating making significant changes at the district to combat an increasingly precarious financial situation.

The decrease has been particularly acute in the last five years, showing a steady decline since the 2014-15 school year. Between the 2017-18 and 2018-19 school years, the fund balance decreased by a little under $4.7 million.

Although interim Superintendent Silvia Ibarra said Tuesday that she’s confident Valley View can turn its finances around, she said in order to stay financially sound, the district will have to reduce expenditures and there will be some hard decisions ahead for the board.

Ibarra said the state recommends districts have 75 to 90 days of expenditures on hand, compared with the 25 days of funds it currently has — not exactly a reassuring measurement of fiscal integrity.

According to Ibarra, most of the expenditures from the general fund in recent years went toward paying for special projects, funding bond debt payments and making up for a loss in state revenue.

The ratio between students and staff has crept up marginally in that time, going from 6.45 to 6.6.

Although none of the district’s solutions for its financial situation are set in stone, conservatively reducing staff is one of three major changes being eyed to make the district financially sound again.

Reductions in staffing are likely to be the hairiest revenue reduction the district will face, at least based on criticism the district has already faced from staff reductions this year. Over a dozen student-athletes and their parents criticized the district’s decision to terminate all paraprofessionals employed by the district, including several head coaches, at a board meeting in January.

Board President Claudia Coronado said that decision was made after the district was notified that it was not in compliance with the Texas Department of Labor regarding hours worked by the district’s paraprofessional coaches.

Ibarra says staffing accounts for somewhere between 75% and 85% of the district’s expenditures and is the most important area for the district to find cuts. She said the district has not adjusted staffing to match declining enrollment and is overstaffed by about 25 teachers in addition to other support staff.

“We can’t ignore it,” Ibarra said. “We can’t really find significant savings in other places. We’re trying very hard, we’re exploring everything, but again staffing is definitely an area that we have to look at.”

The district is hoping to find savings in that area without hurting its employees too much.

Ibarra says the district is hoping to reduce staffing through attrition. The board may also decide on early notification of resignation incentives for staff considering retirement or eyeing jobs at other districts as soon as its next meeting, a monetary incentive solution Ibarra hopes will be a win-win for the district and its employees.

“We value our employees, we’re grateful for their loyalty, but we have to reduce staffing,” she said.

In addition to reducing staffing, the district is considering abolishing two entities: its fifth-grade campus and its police department.

Ibarra says the district’s three-officer police department could be dissolved by returning to a reliance on local municipal departments that would meet the safety needs of the district.

Closing the district’s fifth-grade campus, Ibarra says, would also save money. The district could accommodate fifth-graders at other facilities without disruptions and reassign teachers from that campus to other elementary campuses, she said.

Administrative and support staff could be assigned to comparable positions in the district.

“The enrollment at the fifth-grade campus continues to drop every year, currently we’re at about 250 students, and so we know that it is not cost effective to maintain a campus open with that amount of students,” Ibarra said.

In addition to those three cost-saving measures, the district is considering a budgeting trick that cout save it a hefty chunk of change.

Although Ibarra said the district wouldn’t be able to make the change until the 2022-23 school year, she said changing the district’s fiscal year from September to August, to July to June would result in a one-time savings of about $3 million.

“That’s something that we’re certainly going to consider,” she said. “It’s too late for this year, but for the following school year, in preparation for the 2022-2023 school year.”

None of those decisions are finalized as of yet and the district’s immediate direction remains in question. Although indicators point toward currently suspended superintendent Monica Luna exiting that post and Ibarra inheriting it, Ibarra said that a final decision on the district’s executive has yet to be made.

She did express faith in the district’s current leadership’s ability to navigate its financial turmoils.

“We’re working very hard, and I will tell you that the board is committed to getting the district back on track financially by increasing the fund balance and reducing expenditures while still meeting the needs of our students,” Ibarra said. “The board, as you know, is a very young board. It’s comprised of seven very intelligent, very knowledgeable and fiscally responsible individuals who are making fiscally informed decisions for the betterment of the district. It’s an amazing team.”