Gov. Greg Abbott visited the Rio Grande Valley on Tuesday to announce the implementation of Operation Lonestar, a move that will increase resources along the border in light of overwhelmed agents working for U.S. Border Patrol, especially in the Valley.

“This is an example of what you’re going to be seeing up and down the border,” Abbott said, pointing to multiple trooper vehicles, a boat and various helicopters behind him at Anzalduas Park.

Over 500 Texas National Guard personnel will be additionally deployed, a state official announced.

Last week, the Texas Department of Public Safety sent additional troopers to Starr County for a period of 60 days, according to county officials.

Local and state authorities started supplementing gaps on highways after U.S. Border Patrol agents were pulled to the front line at the border early January, according to Hidalgo County Sheriff J.E. “Eddie” Guerra.

Border Patrol authorities in the Rio Grande Valley are struggling with overtaxed facilities as apprehensions of adults, families and children are rising to the rate of the last surge in 2019.

But this is not the first time DPS has conducted an operation to bolster Border Patrol’s operations during surges of migrants crossing illegally into the United States. 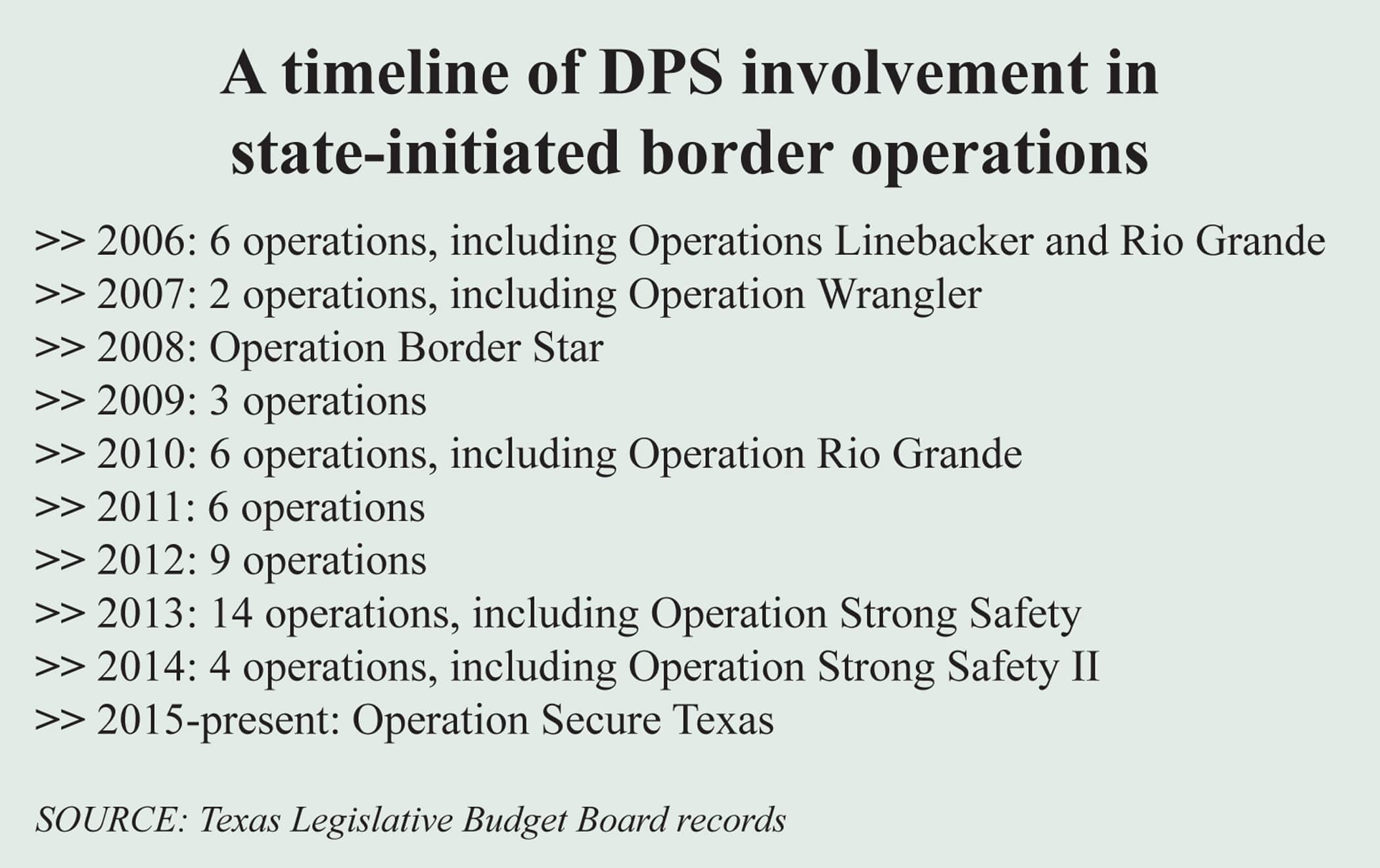 Former Texas Gov. Rick Perry in 2005 announced the implementation of Operation Linebacker, which provided funds to sheriff departments and DPS to create “a second line of defense” for Border Patrol.

This program was implemented in 2006 and that same year, DPS also participated in Operation Rio Grande, which was an effort to combat organized smuggling activity between ports of entry.

Between 2006 and 2015, legislative records indicate that DPS has participated in a little more than 52 state-initiated border operations.

Since then, DPS has continually contributed resources toward border operations under Operation Secure Texas in various ways, including hiring more troopers for the border region, installing thousands of detection cameras along the border, as well as investigating cartels, drug interdiction and the arrest of people crossing illegally into the U.S.

The governor exchanged criticism over the Biden administration’s handling of the crisis. Recently, Abbott made a comment on social media alleging that hundreds of migrants with COVID-19 were being released into the country without testing.

Yet, border lawmakers, including U.S. Reps. Filemon Vela, Vicente González and Henry Cuellar, believe the governor is not allowing FEMA funds to be sent to border communities.

They pressured the governor to accept the funds via a letter sent Monday.

“Thankfully, President Biden recognizes the crucial role these communities are filling and has directed the Federal Emergency Management Agency (FEMA) to fully reimburse communities for these services. This removes the financial burden for border communities and allows them to continue welcoming asylum-seekers safely during the pandemic,” the letter reads in part.

The Democratic congressmen also characterized the governor’s remarks about migrants as xenophobic.

“Your recent comments about asylum-seekers carrying COVID-19 into Texas ring hollow when you are the one standing in the way of sorely needed federal resources and ultimately is the same dangerous rhetoric fueling white supremacist attacks on immigrant and minority communities,” their letter stated. “Instead of spreading xenophobic claims, we urge you to accept these vital FEMA funds localities are relying on and work with the Biden Administration as they continue to look for ways to assist both asylum-seekers and Texans.”

Lady Hawks, Chiefs among winners at 32-6A cross country meet