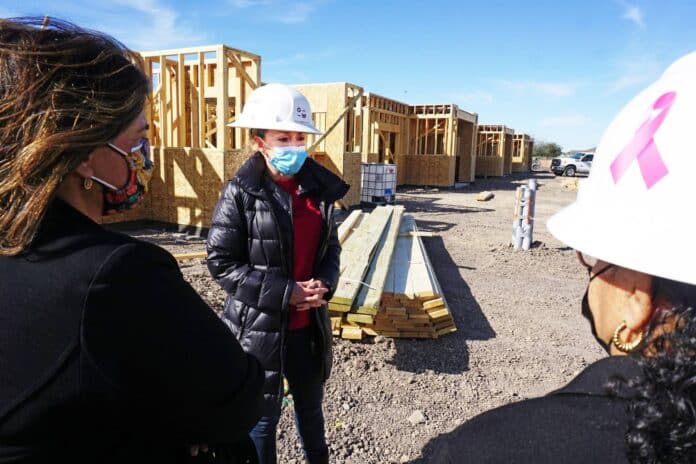 Trail Village, the most recent affordable housing project of the Housing Authority of the City of Brownsville to break ground, is scheduled for completion this fall.

The 48-unit project sits on 4.85 acres HACB owns just west of the Paseo Plaza apartments on Paredes Line Road and immediately adjacent to the Brownsville Historic Battlefield Trail. A ceremonial groundbreaking was held last month, though construction started in late October. The Brownsville Housing Opportunity Corporation, HACB’s development arm, is the general partner and developer on the $12 million project.

Trail Village will consist of three separate residential buildings and one leasing office. Living spaces will be available with one, two or three bedrooms. First shot on the apartments will be given to current residents of HACB’s 80-year-old Bougainvillea Housing Development at 755 W. Jefferson St., which is slated for demolition when unoccupied.

Carla Mancha, the housing authority’s CEO, said that like other HACB projects Trail Village is about improving families’ quality of life, in part through amenities. The hike and bike trail next door counts as a big one, as does the location of the project itself near a number of retail outlets and services. The same can’t be said of the Bougainvillea neighborhood, located in a census area with a 60-percent poverty rate compared to less than 30 percent for the Trail Village area, she said.

Laura Villarreal, HACB’s resident commissioner, who serves as an advocate for families to the housing authority’s board and administration, said she’s happy and proud to see Trail Village come to life because it means additional safe and dignified housing opportunities for low-income residents. Villarreal praised the work of Mancha and her HACB team. 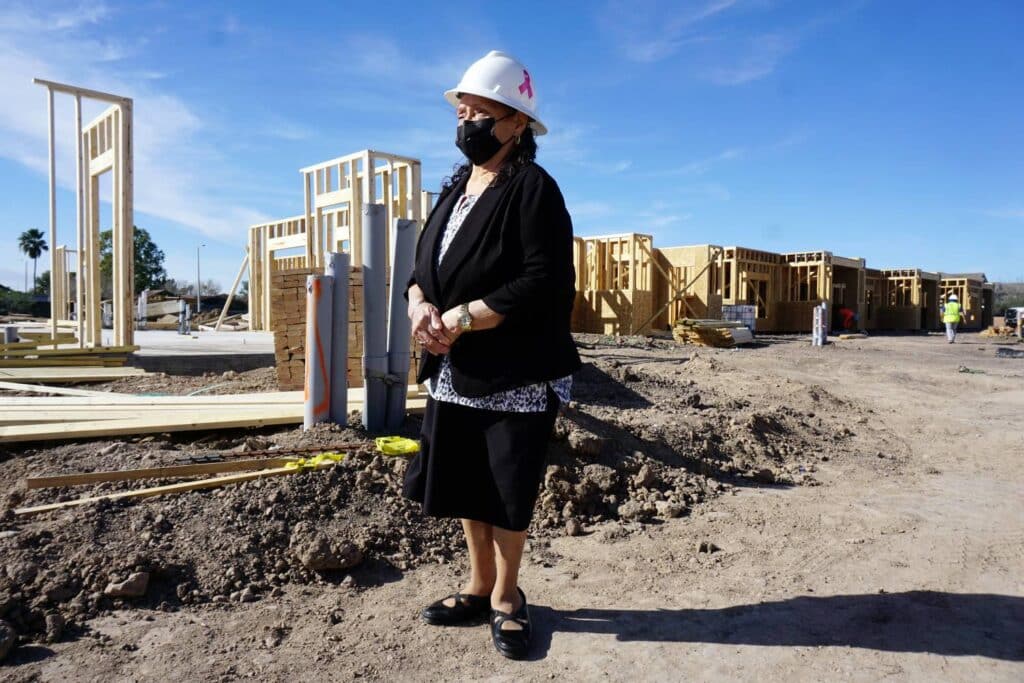 Another major amenity for Trail Village is that it will contain one of three BiblioTech digital libraries in the city. The brainchild of Bexar County Judge Nelson Wolff, the BiblioTech concept involves a digital conduit between low-income neighborhoods and local online library resources — in this case the Brownsville Public Library.

“He wanted to take the resources of a traditional library to low-income neighborhoods so that families who are not able to commute to the library in another neighborhood would have those services right there near them,” Mancha said.

U.S. Rep. Filemon Vela introduced HACB to BiblioTech about 18 months ago, she said. In recent months the housing authority and Bexar County approved a partnership to implement the concept in Brownsville. Late last month Brownsville and HACB approved a memorandum of understanding that gives BiblioTech users access to the city’s online resources.

Brownsville’s other two BiblioTechs will be located at HACB’s new development Poinsettia Gardens at Boca Chica, and the Brownsville EnVision Center at 1406 E. 14th Street.

“We received $25,000 from Spectrum Charter to help us jump start that site,” Mancha said, adding that the BiblioTechs will be open to the community at large and not exclusively HACB residents.

“We think it’s an innovative way to connect families,” she said.

Mancha said demand for affordable housing is high in Brownsville and that Trail Village will help put a dent in it. Although HACB serves just over 3,800 families, another 3,507 were still on the waiting list as of Dec. 31, she said.

Meanwhile, HACB has obtained all certificates of occupancy for Poinsettia Gardens and the process of moving families in is nearly complete, Mancha said.

“We’re hoping to have a ribbon cutting for that one in April,” she said. “At that time we’ll announce that BiblioTech site. … All that’s left to do is some site work. We’re also going to develop a community garden there at (Poinsettia Gardens).”

HACB’s board hasn’t decided what do with the Bougainvillea property once residents are out and the old structures have been razed, Mancha said, noting that rehabilitating the 80-year-old buildings isn’t feasible from a financial perspective.

“The recommendation will be to demolish,” she said. “Now the question is do we redevelop there or is it a better option to consider other opportunities?”

Newborn dies due to COVID-19 in Hidalgo County