McALLEN — There was a big shakeup in Rio Grande Valley politics at the state Capitol last week.

Every two years, the Texas lieutenant governor assigns members of the senate to committees that review bills filed under their jurisdictions. The members are tasked with hearing testimony and making recommendations on which proposed laws to pursue.

This year, Lt. Gov. Dan Patrick made some eyebrow-raising changes when it came to the Valley’s representation on those Senate committees.

Last session, Lucio was one of only two Democratic senators appointed to chair a committee. This year, however, Patrick only appointed one Democrat as chair: Houston’s John Whitmire, the Senate’s longest-serving member, will continue to chair the Committee on Criminal Justice.

“(Lt.) Gov. Patrick made it very clear when he ran for lieutenant governor that he would have fewer (Democratic) chairs,” state Sen. Judith Zaffirini said Tuesday. “He’s not doing anything he didn’t say he was gonna do. Do I wish it was different? Yeah. But he’s the lieutenant governor and he has the authority, he has the power and he’s being true to his word.”

Both moves appear to have taken the senators by surprise, especially because Hinojosa’s post on the Finance Committee, which he held for over a decade, was instead handed to Lucio.

“I was not assigned to the Finance Committee, but on the positive side, my colleague and Valley Sen. Eddie Lucio was assigned and named vice chair,” Hinojosa said Monday. “We work together as a team on the funding priorities that are needed in the Valley.”

Lucio said Patrick approached him last year about the change, which was announced via a news release in December.

“I was offered that (assignment) by the lieutenant governor. It was either that or continue to be chairman of my committee on intergovernmental relations,” Lucio said Monday. “I saw an opportunity to do some good things, work on some good funding measures for the Valley that I thought possibly I could do, so I took the challenge and accepted his offer.”

And while Hinojosa helped usher the state through some of its most recent budgetary crunches, including a $15 million budget reduction in 2011, Lucio said he’s no stranger to the committee and that Patrick told him he wanted to go in a different direction this year.

“Well, he told me he wanted me to serve on that committee. I had served in finance before, and they were going to have a, you know, a very different type of session, and he wanted the experiences that I have gone through as a committee member ever since 1991,” Lucio said. “I just completed my 30th year in the Senate. I was in the House of Representatives for four years, two terms, and I was on the committee on Financial Institutions there, as well, and also on Local Government. So all these years and all these experiences I’ve had, obviously, he recognized this and wanted to put me to work there to help create a budget that would sustain the services of state government for the next two years.”

Lucio, however, has been accused of “being too cozy with the Senate’s Republican leadership” and accepted campaign donations from “some of the biggest GOP donors in Texas,” a Texas Tribune article noted last year after he narrowly won the Democratic Primary challenge by Sarah Stapleton-Barrera.

“Lucio, a conservative Democrat, has long split with his party on issues like abortion, and has cast votes that were controversial within his party in recent years on private school choice and the 2017 ‘bathroom bill,’ which would have restricted transgender Texans’ access to certain public facilities,” the article stated.

That bathroom bill was brought up by Patrick through the Committee on State Affairs, where Lucio and Zaffirini will continue to serve as members this session.

“State Affairs is very broad, so just about anything could be sent to State Affairs,” Zaffirini said. “A lot of controversial bills are sent there. For example, the restroom bill was sent there.”

Lucio also spoke about the range of topics the committee takes up.

“Those issues, obviously, are extremely important. It could deal with anything from abortion to the death penalty, or anything that the lieutenant governor cares to send there,” he said.

Aside from the finance committee, Lucio will also serve as vice chair of the Senate Committee on Education.

“It gives me a chance in education to echo the sentiments of our teachers, more importantly our parents, the parents of our children, and work with all interested groups (so) that we might be able to pass good public policy that will help our children achieve their educational goals,” Lucio said about his appointment.

“We’re facing many challenges dealing with police reform, so I was very happy with that assignment,” Hinojosa said about his post on the Committee on Criminal Justice.

Meanwhile, Zaffirini will serve as vice chair of the Senate Committee on Natural Resources & Economic Development. She will be joined there by her two Valley colleagues, who were also appointed to the committee.

None of them, however, were appointed to the Committee on Veterans Affairs and Border Security. The only senator who represents the border between the U.S. and Mexico on that committee is El Paso’s Cesar Blanco.

“I was surprised because obviously for us that live down here in the Rio Grande Valley, we’re very familiar with the security issues and the border issues and challenges that we face on a daily basis,” Hinojosa said. “So that was a surprise.”

Still, it doesn’t mean the Valley won’t have its say in an issue that repeatedly shines a spotlight on the region.

“We are a small group of 31 senators, so we communicate and talk to each other, and any of us can sit in on any committee (hearings) and participate — if we have the time,” Hinojosa said.

“I don’t think there should be any outcry on that or any concerns shown because Sen. Hinojosa and I can go at any time to the meetings (of the) Veterans Affairs and Border Security Committee and see how the whole public hearing works,” Lucio said. “Members are welcomed to come in and even sit in those committee hearings — without the power to vote, but with the power to give testimony and also question those that come before the committee giving testimony. So I will still be active in making sure that we get the funding necessary for border security.”

Both senators, however, will have voting power on the Senate Committee on Redistricting.

“Redistricting is probably one of the most partisan issues we take up every 10 years where we have to redraw district lines for the Texas Senate (and House) and for the House of Representatives in Congress,” Hinojosa said.

Texas is expected to gain three congressional seats, but they are not likely to be located in the Valley.

“I think, quite frankly, it will be in the metropolitan areas of the Dallas-Fort Worth area, I think the Houston area and Austin-San Antonio metroplex,” Hinojosa said. 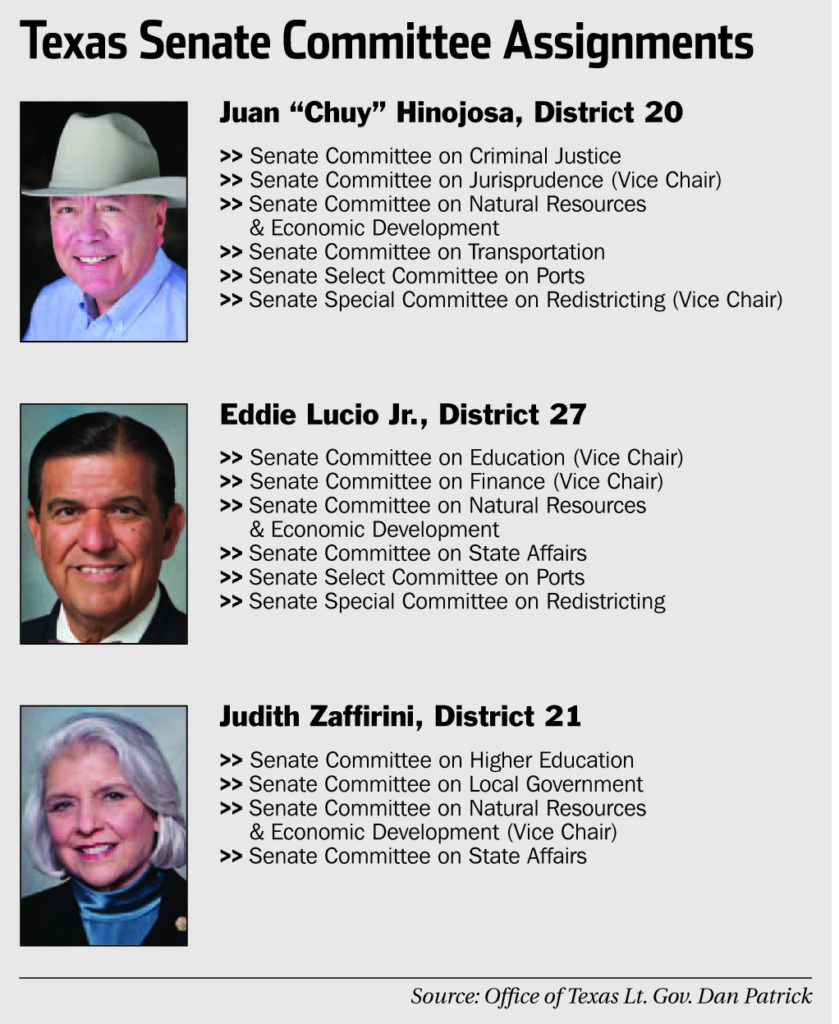