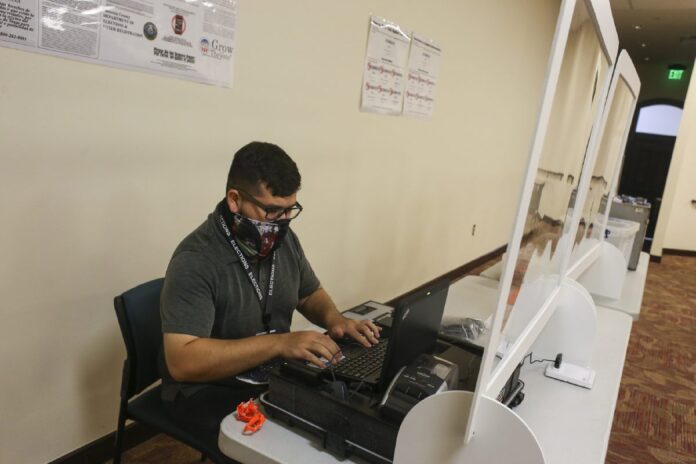 The Cameron County Department of Elections and Voter Registration is doing everything it can to make voting as safe as possible during the upcoming runoff election short of being able to offer everyone the safest option, voting by mail.

“We are going to be social distancing,” Garza said. “The employees will all be wearing face coverings, whether it’s a face mask or a plastic shield. We’re introducing some protective barriers between the voter and the poll worker to reduce the possibility of infection. We’ve also modified our check-in procedure, so there’s less contact between poll workers and the voters. We’ve installed new little cameras so that the identification can be read and the voter qualified much quicker.”

Polling stations will provide hand sanitizer at entrances and exits, and the hard surfaces where voters mark their ballots will be disinfected frequently, he said.

There are three seats up for grab on the Democratic Party ticket which include a runoff for county sheriff between incumbent Omar Lucio and former district clerk Eric Garza, a runoff for the 138 state District Court seat between Gabriela “Gabby” Garcia and Helen Delgadillo, and a runoff for state senator District 27 between incumbent Eddie Lucio Jr. and Sara Stapleton Barrera.

On the Republican ticket there is a runoff between incumbent Pedro Delgadillo and Norman Esquivel Jr. for Cameron County Constable Precinct 1.

Garza said the elections department has received guidance from the secretary of state’s office as well as the county health authority and county emergency management departments to help ensure a safe election.

“We’re doing everything we can to ensure that all the steps to protect the election are still in place and we’re still meeting our obligation to the election code as well as the community, but also creating safer voting environments,” Garza said.

Texas has among the nation’s most restrictive vote-by-mail rules. To qualify for a mail-in ballot in the state, voter must fit into at least one of four categories: 65 or older at the time of the election, suffering from sickness or disability, absent from the county during early voting and election day, or confined in jail but still eligible to vote. The elections department must receive mail-in-ballot applications no later than July 2.

Voters can access mail-in-ballot applications, and detailed instructions for submitting them, on the elections department website. Voters may also call (956) 544-0809 for an application, or visit elections department headquarters in person at 1050 E. Madison St. All visitors must wear masks or facial coverings due to the pandemic.

“It’s up to each voter when they fill out the application to make the determination if they have a qualifying reason to vote by mail,” Garza said. “If somebody is extremely ill, it does not have to be a permanent disability, but something that would prevent them from casting their ballot during this election.”

Although the state doesn’t allow it, he thinks any eligible voter who wants to should be able to vote by mail.

“It’s a question of, if the voter elects to vote by mail, I certainly think it should be each voter’s choice to do that,” Garza said. “I don’t think that we should be proactively mailing them ballots or applications, but if a voter is interested in voting that way I think they should be allowed to.”

For starters, it would reduce congestion at polling places during early voting and election day, plus it would give voters more opportunity to review their ballots without feeling pressured to get out of the voting booth quickly when others are waiting in line, he said.

“I think there are a lot of benefits to it,” Garza said. “It’s obviously an option in certain states that have gone completely ballot-by-mail and seem to be successful in increased voter participation, which I don’t think would be something we would be against.”

Texas Attorney General Ken Paxton disagrees, claiming that expanding access to mail-in ballots “will only serve to undermine the security of our elections and to facilitate fraud.” According to election experts, voting by mail is slightly more susceptible to fraud than in-person voting, though voter fraud in U.S. elections is extremely rare in all cases.

Nonetheless, Paxton argued before the state Supreme Court that fear of contracting the coronavirus while voting does not constitute a disability under the law. The court sided with Paxton’s interpretation of the law in a May 27 ruling, but left up to individual voters to determine the state of their own health and whether they believe they qualify for a mail-in ballot under the sickness/disability allowance. On June 26, the U.S. Supreme Court declined to force Texas to offer mail-in ballots to all voters because of the threat over coronavirus.

Still, Garza said that if an applicant for a mail-in ballot checks the sickness/disability box on the application, the elections department has no choice but to process that application.

“If somebody checks the disability box that’s as far we’re able to go,” he said. “We don’t have investigative authority, nor are we medical professionals.”

Meanwhile, applications to the county for mail-in ballots have increased by about a third since the March primary election, which is unusual, Garza said. He doesn’t know if the increase in applications is due to new voters or voters who previously voted in person but are choosing mail-in this time around, he said.

Garza conceded that runoff elections typically see a lower turnout than primary and general elections, and though several major contests were decided in the March primary, two races in the upcoming runoff are attracting substantial: the county sheriff’s race and the state senate contest.

Remi Garza said early voting is beneficial especially now during the pandemic, since it means fewer voters all in one place at any given time, though he still encourages voters to familiarize themselves with the ballot before arriving at the polling place, if they choose to vote in person, to be able to get in and out quickly. Sample ballots can be found on the elections department website.

“I think it’s going to be one to remember regardless of turnout size, simply because of the extra efforts that we’re having to make to secure the polling places,” he said. “But it’s also a very good test for us to see how we’re going to deal with some of these issues in November, where we will see a significant increase in voter participation. We’re hopeful that this will be the first year that Cameron County surpasses 50 percent voter turnout on a presidential election.”