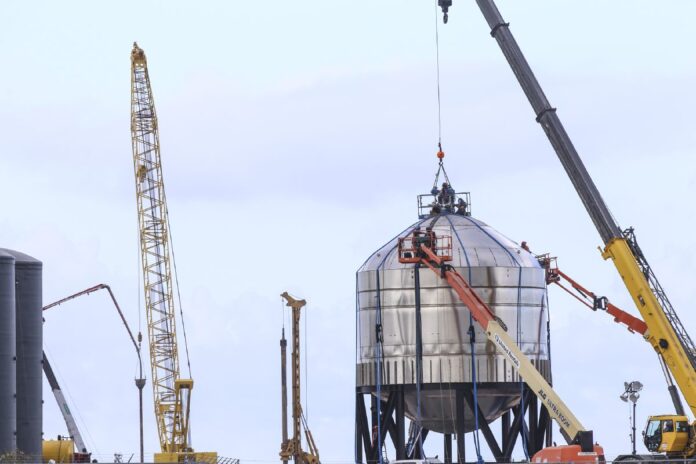 In a SpaceX animated video from 2017, a group of passengers is shown boarding a sleek, high-speed ferry for a quick ride out to a floating platform where awaits a towering Starship — BFR as it was known back then — atop a Super Heavy booster, ready to carry the passengers to nearly any destination on Earth in under 30 minutes.

The video was an advertisement for the company’s Earth destination aspirations for the 100-passenger Starship, though the plan ultimately is to send humans to the Moon and Mars aboard the spacecraft under development at SpaceX’s Boca Chica production complex. And it appears the company’s founder and CEO Elon Musk was serious about the offshore spaceport part. Boca Chica facility, 22 miles east of Brownsville, is advertising for offshore operations engineers to “work as part of a team of engineers and technicians to design and build an operational offshore rocket launch facility,” and for an offshore systems technician whose job in part would be “fabricate, maintain and operate ship and launch sites systems.”

“Hypersonic” refers to speeds much faster than the speed of sound. If the fact that SpaceX wants its offshore operations people at Boca Chica is any indication, at least one floating spaceport will be located off the South Texas coast. Musk said that for safety’s sake, offshore launches would have to take place far from the coast, which means they might not be viewable from land.

“We need to be far enough away so as not to bother heavily populated areas,” Musk tweeted. “The launch & landing are not subtle. But you could get within a few miles of the spaceport in a boat.”

He tweeted on June 6 that the company is pursuing three options for the first launch involving the massive, 31-engine Super Heavy booster: Boca Chica, Florida’s Kennedy Space Center or an offshore platform. The six-engine, Starship and Super Heavy together would stand 394 feet tall, the Starship 160 feet in height on its own. The stainless steel rings that comprise the Starship SN5 and SN6 prototypes have already been “stacked” at Boca Chica and testing on the SN5 should begin soon. Starship SN4 was destroyed in a May 29 explosion caused by a leaky ground support equipment fuel line.

“Giant high bay coming soon,” Musk tweeted on June 6, referring to a Vertical Assembly Building for stacking rings for the Super Heavy, which is designed to carry 3,600 tons of propellant, 80 percent of which will be densified liquid oxygen, he said. The Boca Chica production yard already has one VAB for Starship prototype stacking.

Musk tweeted that a number of test flights will have to take place before Starship carries commercial passengers on Earth-to-Earth trips, and that the first test flights could begin in two or three years. But his eyes are still on Mars.

At the 2014 groundbreaking of the Boca Chica site, he told reporters: “It could very well be that the first person that departs for another planet could depart from this location.” On June 6, beneath an aerial photo of the Boca Chica complex, Musk tweeted: “Gateway to Mars.”

Cameron County Judge Eddie Treviño Jr. has authorized the closing of Boca Chica Beach and S.H. 4 from F.M. 1419 to the beach from 8 a.m. to 5 p.m. on June 19 for “test launch activities,” with June 22 and/or June 23 at alternate days, also between 8 a.m. and 5 p.m. The Federal Aviation Administration on May 28 granted SpaceX a two-year license to conduct suborbital Starship flight tests at Boca Chica.