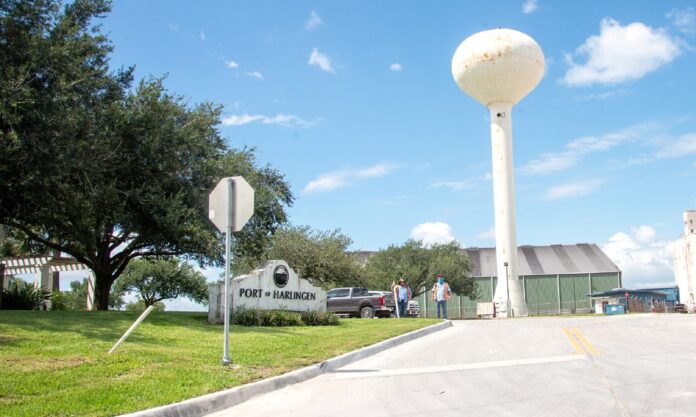 HARLINGEN — The 2,000 acres along the banks of the Arroyo Colorado that encompasses the Port of Harlingen may seem like a lot of land, but these days the port is running out of room.

What’s taking up all that space?

Try two cotton gins which process and ship an average of 120,000 bales a year, and another 150,000 pounds of sugar is loaded and transported, too, along with 100,000 of agricultural fertilizer.

But the real gem is the explosive growth of fuel distillates, gasoline and diesel. The port supplies not just the Rio Grande Valley with fuel, but a large portion of northern Mexico as well.

This unprecedented growth spurt at the port facility has led port commissioners to jettison their old 1990s master plan for a new one, and it envisions investing $35 million in the port over the next 15 to 20 years.

“When I started in 2014, our overall tonnage was less than a million tons, and now we’re looking at overall tonnage of over 2 million tons,” said Walker Smith, port director. “That’s a pretty significant increase in tonnage, and with those increases in tonnages and increasing growth come growing pains, it becomes a need for new infrastructure as well as maintaining our old infrastructure.

Free Trade Zones, also known as Foreign Trade Zones, are areas at a U.S. port of entry designated for storing imported goods. What that means is import duties on merchandise are deferred until the items actually ship.

The Port of Harlingen has 650 linear feet of multi-cargo wharf, 100 feet of which are dry bulk wharf, and five docks along the waterside.

“The changes? Just look out there. The petroleum business here has picked up exponentially,” said Alan Johnson, chair of the port commission. “It started at a very slow pace with I guess Key Petrol over here was the first one, and then Titan came to us with this proposal that seemed almost unbelievable.

“But we went with them and it has been tremendous for him and for us,” Johnson added. “There’s a good working partnership between us.”

To accommodate the thousands of extra tankers coming into the port for diesel — much of it transported to Mexico — the port used a TxDOT grant to almost fully fund an $8.2 million project to create a new staging area for these trucks and their drivers, as well as upgrading roads throughout the port itself.

“It necessitated building all the new concrete roads because the trucks were just tearing everything up,” Johnson said. “And now they’re (Titan) going to expand north up about three-quarters or a mile north of here, and put in a gasoline facility.”

Titan’s new gasoline terminal is just one of the projects on which the port and its tenants have embarked.

In addition to additional road improvements, port officials also are looking to a new cargo and containment yard, along with a new bulkhead, realignment of the rail tracks, improving water, sewage and electric and upgrading dock equipment to handle more diverse commodities.

“Hopefully this will allow us to be able to access new business lines and take advantage of business opportunities that we’ve got coming up,” said Smith, the port director.

They also plan to expand the turning basin in the arroyo, which with all the additional barge tragic, is becoming a tight fit for barges departing the port docks.

“We have very little waterfront property left, and one of the things we’re trying to do is this area right here, we’ve got a shoulder right here that needs to come out and that will expand our turning basin, and will also open up for us more dock front property,” Johnson said, pointing to the opposite side of the arroyo on a map of the port.

“Picking that piece of land up right there, and getting rid of that shoulder, we can use the fill dirt in here and it gives us waterfront and gives us more turning radius,” he added. “You see how hemmed up it is out there today? When they start turning barges, there’s not much room to turn. This is going to give them a whole new perspective out there.”

The vast majority of funds for these port projects will come from various grants with the port kicking in its own monies to make up the difference.

The $8.2 million TxDOT grant for resurfacing and rebuilding roads within the port property was one such grant, but another TxDOT grant of $5.3 million was confirmed Thursday.

These funds, along with $1.75 million in matching port funds, will extend Port and Robles Road, build another truck queuing area which also will serve as a laydown yard for breakbulk cargo, which consists of cargo which must be loaded individually, unlike bulk cargo such as petroleum distillates or grain.

Another $2.3 million project for the other bank of the Arroyo Colorado — the port will pay for this one entirely — will put in seawalls and recover areas lost to erosion on the far side of the arroyo.

“The Circle X Ranch, we own I think 16 lots there that have been leased to people over the years, the last 30, 40, 50 years, for fishing and recreational purposes,” Johnson said. “For the last probably six or eight or 10 years, they’ve been coming to us saying, can you do something about the erosion?

“It’s not that we didn’t want to do something about it, we couldn’t afford it,” he added.

Part of the reason the port has been able to expand its spending on infrastructure is due to the reinstatement of a dormant port tax in late 2018.

“We fought long and hard to reinstitute our tax for the port and we had a lot of pushback on that,” Johnson said. “But we couldn’t be doing what we’re doing today without the help of the tax.

“It’s not solving all our problems, but it’s helping to solve the problems.”