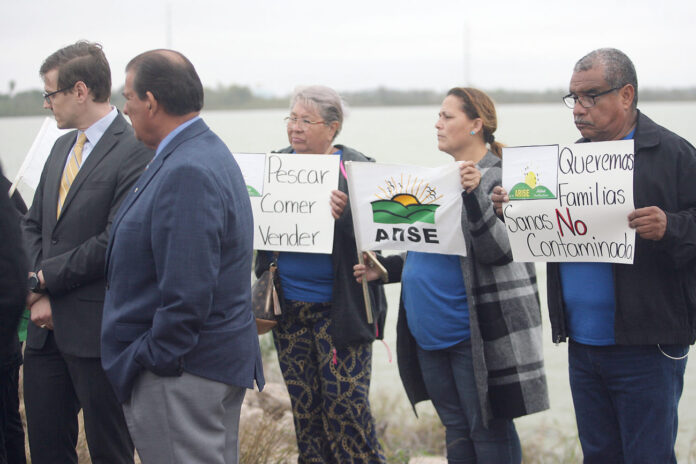 The first phase in a joint effort by the Environmental Protection Agency and the Texas Commission on Environmental Quality to rid the Donna reservoir of a source of cancer-causing contaminants has been completed just three months after the cleanup effort was announced.

Officials removed 13,780 cubic yards of sediment from a half-mile stretch of canal believed to be the source of the polychlorinated biphenyls, which have contaminated the water and aquatic life in the waterway for at least 30 years.

The reservoir and its associated network of canals supply fresh drinking water to the city of Donna and the surrounding areas.

“The removal of this massive amount of sediment is a crucial step towards restoring the site to its original condition and is just one example of the many ways TCEQ and EPA work together to clean up the Texas environment,” said TCEQ Commissioner Bobby Janecka in a news release Thursday.

Janecka and state Sen. Eddie Lucio Jr., D-Brownsville, visited the site in mid-February to announce the $19 million cleanup effort of the 400-acre manmade lake. TCEQ contributed some $3.5 million to the EPA to help get the project underway.

“Completing the sediment removal and treatment is vital to finally restoring the site and making it safer for the South Texas community,” said Ken McQueen, regional administrator of the EPA’s south central region which encompasses Texas, Arkansas, Louisiana, New Mexico and 66 Tribal Nations.

The site remediation included dredging a half-mile stretch of canal, then drying and treating the sediment before disposing it offsite, according to the news release. Water drained from the sediment was ultimately returned to the system after being treated.

Afterward, the EPA restored the canal banks and fortified them with rock aggregate.

Though the site has been on the EPA’s National Priorities List of contaminated sites since March 2008 — the year the EPA declared it a Superfund site — officials have known of the presence of carcinogenic PCBs for nearly three decades.

PCBs were first detected in fish harvested from the lake in the early 1990s, but the source of the contamination remained unclear for decades.

Since then, the EPA, through various partners such as the U.S. Fish & Wildlife Service, have conducted seven fish removal operations and removed more than 47,000 contaminated fish.

Possessing fish and other aquatic life from the lake has been banned since 1994, when the Texas Department of Health issued an order declaring the lake a prohibited area, but that has done little to stop anglers from casting their lines in the waterway in the intervening years.

After a renewed environmental investigation, the EPA homed in on what they believed to be the source of the contamination: a concrete siphon in a canal installed at the reservoir system’s infancy in 1928.

McQueen said the EPA is working to accomplish its cleanup goals for the site “as quickly and safely as possible.”