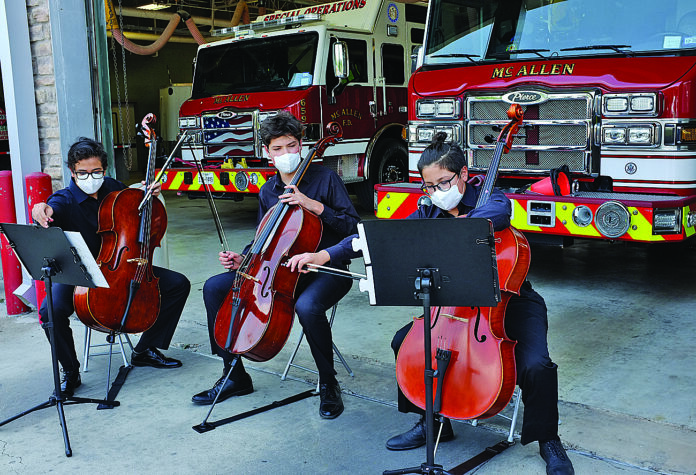 McALLEN — A few of the fire academy cadets exercising at the McAllen Central Fire Station paused between pushups and cocked their heads for a moment. Looking through the open doors of the station, they saw the Cruz brothers as the boys pulled bows across the strings of their cellos for the first time Wednesday afternoon.

The cadets had been told to refrain from the yells they usually make to keep count of their exercises. Now they heard why.

The Cruz brothers, who are students at McAllen ISD, were at the station Wednesday for the latest stop in a community service project they came up with after struggling to find a way to volunteer during the COVID-19 pandemic.

“It’s very difficult,” Octavio, the eldest brother, said. “One of the things that we do best is play our instruments. So we figured to give back to the community, to give back to these men who risk their lives for us every day, we thought it would be nice to spread joy to them through our music.”

Octavio and his brothers, Alejandro and Marco Antonio, set up in front of one of the station’s trucks and began playing Bach and Bizet, Mozart and Vivaldi, the notes floating through the station and into the ears of the burly face mask-clad firefighters.

It wasn’t the Cruz brothers’ first pandemic concert, but so far it’s one of their biggest.

“My dad, he works at a medical facility, and we’ve played for their nurses and their doctors there. We’ve also played for some seniors in the community; maybe some people who are sad, we go and cheer them up. It’s just something that we really enjoy doing,” Octavio said.

Octavio said the work the firefighters do every day made Wednesday’s concert even more important.

“What they do is really very difficult. They risk their lives for our safety, and tomorrow isn’t guaranteed for them… so, I think it’s very important to give them something today they’ll never forget,” he said. “We just thought this was a really good way of doing it and very fulfilling too.”

“Our guys are here for 24 hours,” Schultz said. “They’re on high alert; they’re just constantly waiting for that bell to ring. When it does, the noise from that is just jolting. This is a welcome reprieve, a nice stress reliever and it’s always nice when the public thanks us for what we do.”

Schultz also said the concert was a pleasant diversion for his firefighters, who are trapped in the station most of the day for their 24-hour shifts because of the pandemic. Usually, he said, the firefighters spend a good deal of their day interacting with the community.

“We’ll go out and we’ll be in the public, we’ll do inspections or public education. Since everybody else is shut down, we’ve restricted our guys in the station. They can go out and get food and whatnot, but they’re just here until the bells ring for right now,” he said.