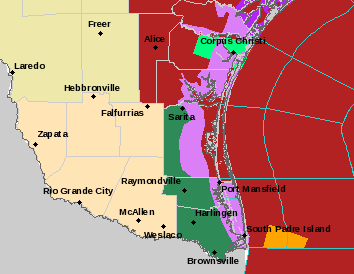 A flash flood watch remains in effect for parts of the Rio Grande Valley until Tuesday morning.

The NWS reports scattered to numerous showers and thunderstorms producing locally  heavy rainfall will be possible across the eastern portions of  Deep South Texas tonight into early Tuesday morning. Rainfall  amounts of 2 to 4 inches are expected across these areas with  locally higher amounts possible.

Low-lying and poorly-draining areas may experience flash flooding.  Heavy rainfall over a short period of time will cause difficulty  in driving. Motorists are urged to find alternative routes if  flooding roadways are encountered.