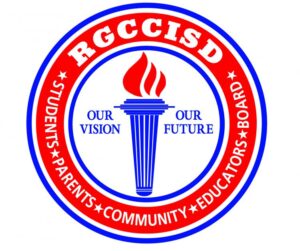 Rio Grande City CISD held a memorial service Friday morning in remembrance of the 20th anniversary of the terrorist attacks on Sept. 11, 2001.

The district spent the morning honoring U.S. veterans and first responders, as well as the civilians who were killed that day 20 years ago.

The ceremony featured guest speaker Rey Alvarez, a retired employee of the school district who previously served in the military.

The retired administrator addressed a crowd of students and shared his own memories of that fateful day.

“We are here to remember Sept. 11, 2001,” a somber Alvarez said at the onset of the event. “Most of you likely were not born since this event precedes your birthdays, but those of us who are older than 30 will always remember where we were and what we were doing on that day.”

Alvarez went on to share a personal anecdote of how he learned of the attacks.

“I was working in my office, and it seemed to be just another day at the office — the regular routine of the day,” Alvarez said. “However, in the blink of an eye, that all changed.”

He recalled the news of the planes that flew into each of the World Trade Center buildings and the Pentagon, and a fourth plane that crashed in Pennsylvania before it could reach its target of the White House in Washington, D.C.

“It was then that it became really apparent that we were being attacked,” Alvarez continued. “This was the worst news ever. So many people were killed instantly. This was a disaster of epic proportions.”

The ceremony also featured a reading by Elian Garza, who read a poem titled, “We Never Saw It Coming.”

“President George W. Bush, in his words, captured it best, ‘One of the worst days in America’s history saw some of the bravest acts in America’s history,’” Villarreal said. “We will always honor the heroes of 9/11, and here, of this great nation, we pledge never to forget their sacrifice.