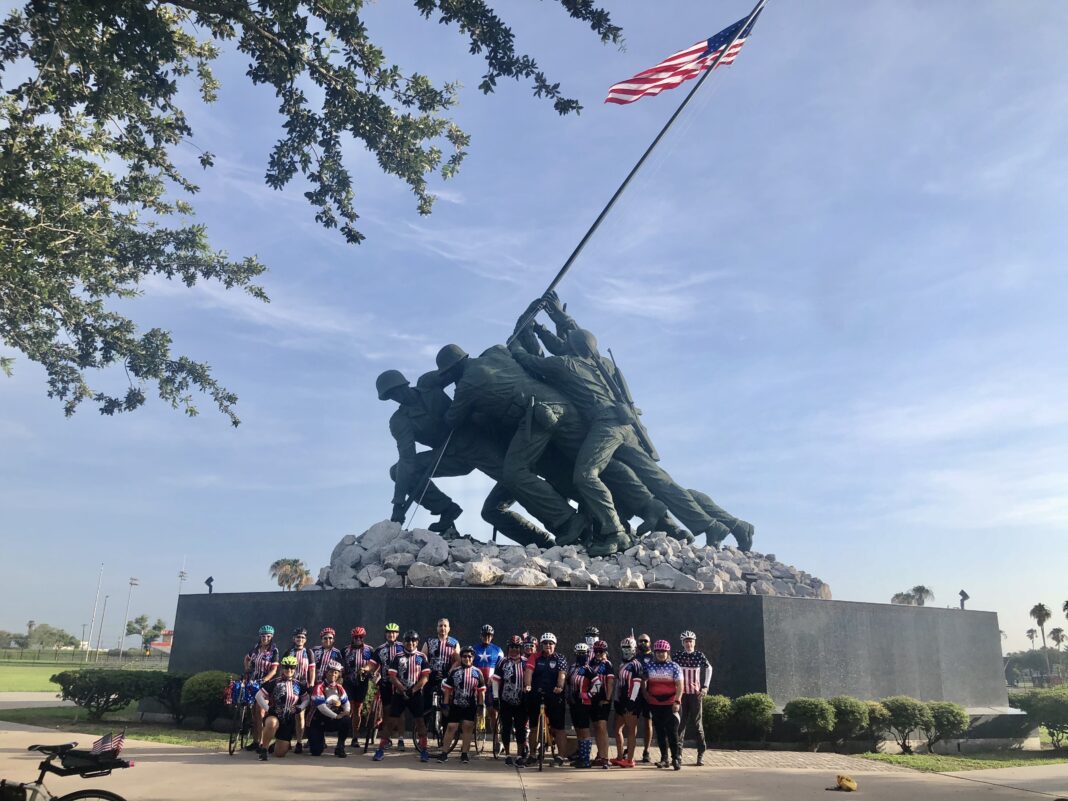 HARLINGEN — Wheels Down Cycling Group and We Are Fit Friends organized their very first Memorial Day tribute ride, and the cyclists were ready to go Monday beginning at 7:30 a.m. in the parking lot of Valle Vista Mall.

Manny Garza, who is a part of Wheels Down Cycling Group, explained the route began at the mall, head to Sam’s Club and approach Frontage Road.

After the loop, they would go to the Iwo Jima Monument, make a stop and finally finish their route at Pendleton Park to visit the Veterans Memorial located there.

Garza said every weekend the group gathers to ride, but this was the first time they gathered for Memorial Day.

The groups had previously organized rides to commemorate holidays such as the Fourth of July, but the decision to do this one mainly came from having veterans in their groups.

Juan Delgado, a 20 year Navy veteran, has been cycling on and off for seven years. With this one group, he has been cycling for two months. Delgado is from Brownsville but said he enjoys cycling in Harlingen with the group.

It was his first time riding for Memorial Day.

“It feels really nice, for people to show honor,” he said.

“I am going to ride a few more miles in Brownsville. I like cycling because it takes my mind off of things,” Delgado said.

Roger Jeffery is a Harlingen resident since 2006 and is also a veteran.

Jeffery was in the Army and is originally from Houston. He served in Bolivia and Panama and said it was a very nice experience.

Jeffery has been cycling for seven years.

He had done rides before to commemorate Memorial Day.

“It is a good social gathering, and you get some exercise at the same time,” he said.

At the Iwo Jima Monument, located at 320 Iwo Jima Blvd. across the Marine Military Academy, more people arrived along with the cyclists to take a moment to pay their respects.

Leticia and Larry Graham, from Arlington, had been vacationing at South Padre Island for the weekend and decided to pay a visit for the first time on Monday.

Both said standing there was moving and touching.

“We never served but certainly have respect,” Larry said.

Robert Weaver, a Harlingen resident and 20 year veteran, was taking a walk by himself through the memorial. He said every year he pays a visit and just takes it all in.

“I like to slow down and reminisce about American history. A lot of people forget what today means to us all, what these guys went through. Some made it back and some didn’t,” Weaver said as he continued to walk in silence.