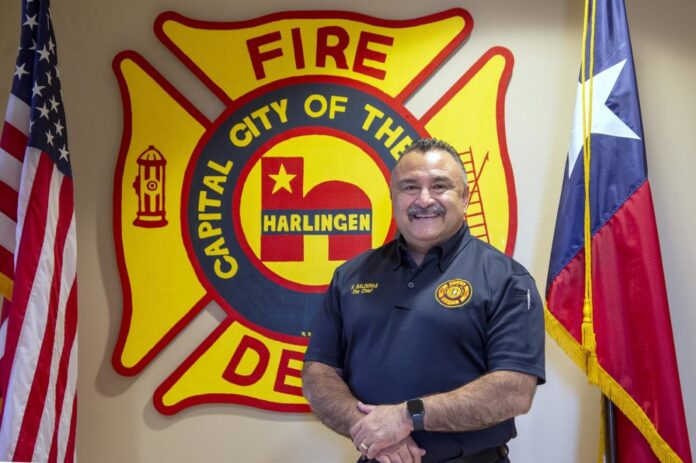 His job as fire chief began on Dec. 2 and so far, Balderas said he realized the department is filled with people who love their community and love to serve.

Balderas worked at the McAllen Fire Department for 27 years and started out when he was 28 years old.

He was a fire chief in McAllen for almost eight years until he retired in March of 2020.

Originally, he retired to travel the world with his wife.

“With COVID-19 happening, there is not much traveling going on. My wife had retired also, and they called her to go back to work. And she took it. I found myself at home,” Balderas said.

He saw there was an opening in Harlingen and decided to apply.

“I put my name in the hat and ended up getting the position. I took an eight month vacation,” he said.

Balderas already had a connection to Harlingen, having graduated from TSTC.

“Before I joined the fire service, I actually worked with Shell Development in Houston. I actually came to school here at TSTC and graduated and went to work with Shell. I was a research technician,” Balderas said.

“We would analyze water and wastewater,” he said.

Balderas worked as a part of a rescue squad, a small fire department of the facility, and he was sent to Texas A&M University, where he was introduced to firefighting.

When it comes to new direction and ideas as fire chief, Balderas is getting to know the department.

“I am still getting my feet wet and seeing what this New Year brings,” he said.

Since he started, Balderas has fought two different house fires with the department, one in Combes that ended in a death.

“That is part of the job. It is unfortunate we have incidents like that, but we do our best to educate the community on fire safety. But sometimes things are going to happen,” Balderas said.

As fire chief, he said he is responsible for the department and everything it involves, including the personnel and the department’s response.

Because he was in McAllen for so long, Balderas is getting to know the community, which he said is one of the most important aspects of being a fire chief.

His initial urge to become a firefighter came after his experience while working at Shell, but now, he is in love with his career.

“Being a firefighter is the best job in the world. It has a great schedule as you are coming up. And one third of your life you are at work, but I would not have it any other way,” he said.