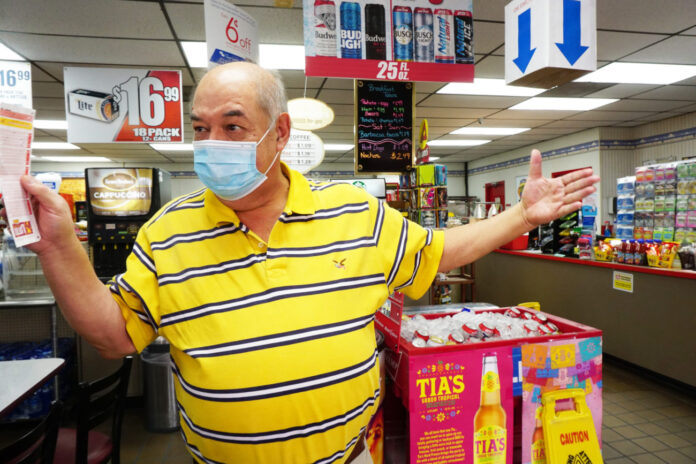 Two gigantic jackpots are lurking in the Texas Lottery, both multi-state games that offer grand prizes worth hundreds of millions of dollars and secondary prizes into the millions.

As of Wednesday the estimated annualized Mega Millions jackpot was $410 million and growing, while the similar top prize in the Texas Powerball lottery was $363 million, also growing by the minute. The amounts for each game grow with each drawing until there is a national winner. The jackpots have approached and even surpassed $1 billion, although the odds of hitting one are infinitesimally long, not impossible but extremely unlikely.

It’s also completely impossible to win if you don’t play, which brings us to the Exxon Food Store at Expressway 77/83 and Alton Gloor Boulevard, one of the leading lottery retailers in Texas and many Brownsville residents’ favorite place to play the lottery, from $1 scratch tickets to the big-time jackpot games.

“ You have to play it to win,” Jorge Jaime of Brownsville said Wednesday afternoon after purchasing several tickets. “I play as much as I can, especially when the jackpot amounts are high. I try not to get too carried away.”

Jaime said his biggest paydays were $800 on a Texas Two-Step ticket and $300 on a Weekly Grand scratch ticket.

He’s played the lottery since moving to Brownsville from New Orleans in 2013.

He and other players at the store Wednesday afternoon were buying a mix of scratch-off tickets, and lotto-style games including Lotto Texas that has been part of the Texas Lottery since it started in the early 1990s.

Store manager Mildret Garcia said the Exxon Food Store has become a popular place to play the lottery because it offers a rack of 129 different scratch-off tickets to choose from. Players often buy scratch tickets while also playing the lottery, either playing their own numbers or letting the computer generate a quick pick.

The store gained notoriety three years ago when a customer won $7.5 million on a $50 scratch-off ticket. They had to go to lottery headquarters in Austin to redeem the prize. About the same time another customer won $900,000 on a Texas Two-Step ticket purchased at the store, Garcia said.

Carlos Segura of Brownsville but originally from Port Isabel, said he prefers to play Lotto Texas because the game is limited to Texas and has somewhat better odds of winning.

“ This is the luckiest store in Brownsville,” he said. “I stop by on my way to work and try my luck” always buying a quick pick. He said he’s won $500 more than once.

Catherine Cuellar, also from Brownsville, said she likes to play the number 13, if possible around 1 p.m. because that is the 13th hour of the day. She usually plays Texas Powerball, and occasionally Mega Millions, although she has yet to win.

The biggest Poweball jackpot was $1.586 billion in 2016, while the largest Mega Millions jackpot was $1.537 billion won on one ticket sold in South Carolina on Oct. 23, 2018, according to Wikipedia.

Powerball drawings are on Wednesdays and Saturdays, Mega Millions on Tuesdays and Fridays.