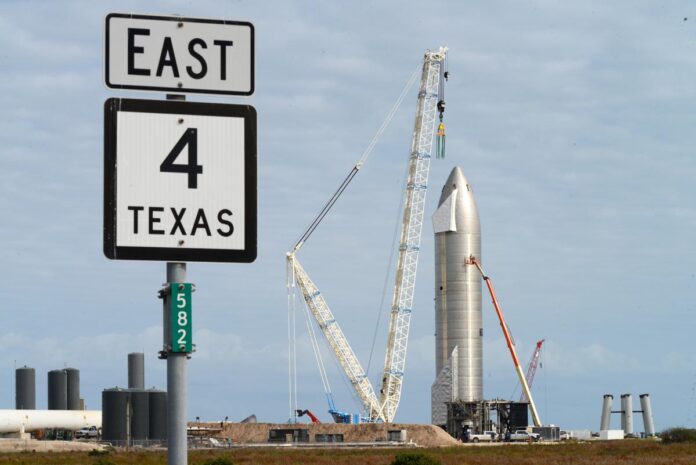 The Federal Aviation Administration is soliciting feedback during a public scoping period as part of a draft environmental assessment (EA) of SpaceX’s plans to launch Starship-Super Heavy prototypes from the Boca Chica Launch Site just over 20 miles east of Brownsville.

The step is necessary so the FAA can determine the scope of issues that will be analyzed in the EA. The agency is inviting public comments on potential impacts and alternatives and asking for help to identify relevant information, studies or anything else having to do with impacts potentially affecting the “quality of the human environment” as a result of SpaceX’s proposed operations.

Comments can be submitted to spacexbocahica@icf.com. The deadline for submitting comments is Jan. 22.

The proposed Starship-Super Heavy launch operations would include suborbital and orbital flight tests, static-fire engine tests and other pre-flight activities; expansion of the site’s solar farm and addition of infrastructure in the launch area. SpaceX’s also plans to build an extra launch pad and extra landing pad, “integration towers” tall enough to enclose the nearly 400-foot-tall Starship-Super Heavy configuration — “Starship” collectively — as well as a desalination plant and system for pre-treating liquefied natural gas, according to the FAA.

SpaceX’s originally stated intention for Boca Chica, where the company broke ground in 2014, was for up to 12 commercial launches a year using SpaceX’s Falcon 9 and Falcon Heavy rockets. The company later decided to develop and test Starship — which is being designed to carry humans to the Moon and Mars some day — at Boca Chica. The Starship development program began in Cameron County last year.

So far SpaceX has conducted three successful low-altitude “hops” of Starship prototypes and, on Dec. 9, the first high-altitude test flight. The Starship SN8 prototype flew to 41,000 feet and descended under control but was destroyed upon landing after coming in too fast. SpaceX founder and CEO Elon Musk, who had given the test a three-in-one chance of success, proclaimed it a success. The subsequent prototype, SN9, was transported from the Boca Chica production complex to the launch site on Tuesday.

Although the FAA conducted an Environmental Impact Statement (EIS) and issued a Record of Decision (ROD) in 2014 green-lighting the site for 12 commercial launches a year, and has produced several written re-evaluations and addendums from 2014 through this year allowing test flights to go forward, the proposed Starship-Super Heavy operations require a fresh look according to National Environmental Policy Act regulations, since they fall outside the scope of the existing EIS and ROD, according to the FAA.

SpaceX is working with the FAA to prepare the draft EA, which will be subject to the agency’s evaluation and approval. With the EA in hand, the FAA will decide on “the appropriate course of action.” The options are preparation of the more comprehensive EIS due to significant projected environmental impacts from Starship-Super Heavy operations, issuance of a Finding of No Significant Impact (FONSI), or issuance of a Mitigated FONSI that provides for mitigation measures to offset environmental impacts.

A decision from the FAA on which course to pursue may take place during the EA process or after SpaceX presents the draft EA for FAA approval, according to the agency.

Ultimately, the FAA could opt for a “no action” alternative, which would result in no new licenses issued to SpaceX for tests or launch operations at Boca Chica. Under that scenario, the company would be able to conduct Starship prototype launches only as authorized by the current FAA license, which expires in May 2022 and does not cover Super Heavy launches.

Stacey M. Zee from the FAA’s Office of Commercial Space Transportation advised those who submit comments that personal information such as addresses, phone numbers and email addresses “can be made public at any time.”

“While you can ask us in your comment to withhold from public review your personal identifying information, we cannot guarantee that we will be able to do so,” she wrote.

Go to faa.gov/space/environmental for more information about the FAA’s environmental review process regarding commercial space transportation.