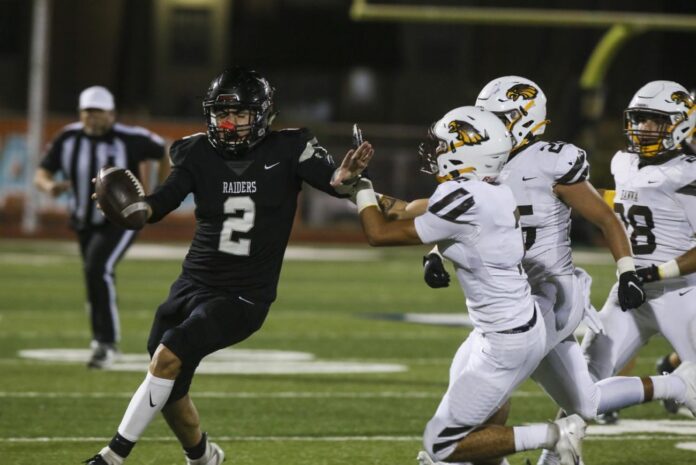 The District 32-6A championship game between Brownsville Hanna and Harlingen High was canceled Monday, making the teams co-district champions.

Brownsville Hanna coach Mark Guess said he was notified by Harlingen High “that they needed to do the COVID quarantine out of caution,” leading to the game’s cancelation. Requests for comment from Harlingen High were not immediately returned.

“We were fired up for it,” Guess said. “In some of these football publications, we were picked to finish sixth in the district, not even being thought of to be in the playoff hunt or anything. For us to get to that district title game and then all of a sudden the rug gets pulled out from under our feet, we were a little frustrated by that. It would’ve been a great game for both schools. But it is what it is.

“But (the players are) very happy to at least get a share of that district title, and we’ll go from here and hopefully win some more titles along the way,” Guess added. “In the year that we’ve had … the way it’s been all crazy since March, us not being able to spend the time with our kids that we normally do, with everything that’s happened, we were still able to win a district championship. How good could we have been if we didn’t have all this mess in the first place?”

The district’s plan included a rule stating that if both zone champions were undefeated and the district championship game couldn’t be played, the teams would share the title. Seeding was not going to be affected by the outcome because Hanna and Harlingen High are in different divisions based on enrollment. Harlingen High and San Benito are the Nos. 1 and 2 seeds in Division I, respectively, and Hanna and Weslaco High are the Nos. 1 and 2 seeds in Division II.

Guess said the Golden Eagles will use the weekend to scout the District 31-6A games that affect their potential playoff opponent and are going to take advantage of having two weeks to prepare for the bi-district round.

“This is just another wrinkle in the year of COVID. It’s not the first time it’s happened to us, where we’re planning for someone and then all of a sudden we’re planning for somebody else,” Guess said. “Our kids and coaches will do a great job of adjusting and getting ready for whoever that playoff opponent may be. It could be PSJA North if they beat Edinburg North, and if Edinburg North wins then we would get the loser of the Edinburg Vela/Mission (High) game.”