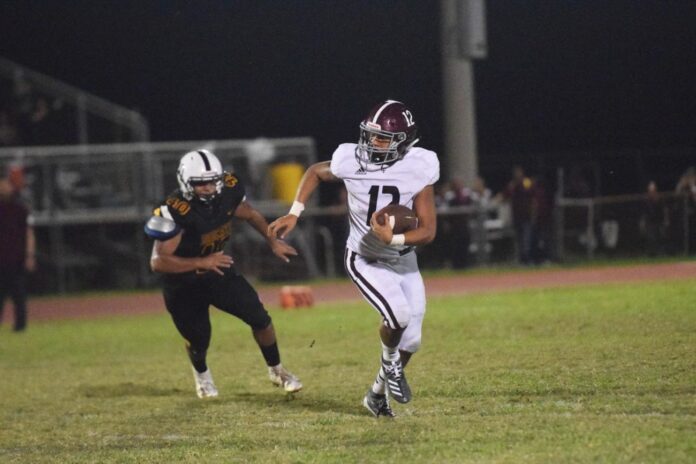 Three East Valley sub-5A football teams will be in action tonight, with St. Joseph, La Feria and Lyford facing district opponents. But one team, Raymondville, canceled its game due to a positive COVID-19 test.

The St. Joseph Bloodhounds, led by senior running back Melik Kauachi and junior quarterback Luigi Cristiano, will take on the Austin St. Michael’s Crusaders at 5 p.m. at Canales Field in their third TAPPS Division II-District 3 contest. SJA bounced back from a season-opening loss to trounce Boerne Geneva last Friday, 49-27.

Lyford (2-0) will be playing its first District 16-3A Division I “Zone A” game against the Santa Gertrudis Academy Lions at 7:30 at Bulldog Stadium. The Bulldogs have showed the explosiveness of their offense and a stout defense during their first two games, outscoring opponents 84-16.

La Feria and new quarterback, senior Dario Sanchez, got off to a slow start in their first game, but the rebuilding team found a groove during the second half.  Running back Angel Garcia and receiver Derek Pena were the top offensive weapons for the Lions. Garcia surpassed 100 yards rushing and scored once, and Pena put two touchdowns on the board.

The Raymondville Bearkats only have one District 16-4A Division II game on their schedule due to COVID-19 this season, so coach Frank Cantu used the open weeks to challenge his team.

Raymondville kicked off its season last week in Falfurrias with a thrilling 38-33 win over Class 5A Victoria West and was scheduled to face another 5A program — the Mission Veterans Memorial Patriots — at 7:30 tonight in Raymondville.

But the school district posted a notice on its web site Wednesday saying the game and an accompanying tailgate have been canceled due to COVID-19 concerns, and that in-person instruction at the school has been canceled as well through Tuesday. The district’s notice said the campus will be shut down from Friday through Monday for deep cleaning, and that high school students will continue school via remote instruction.