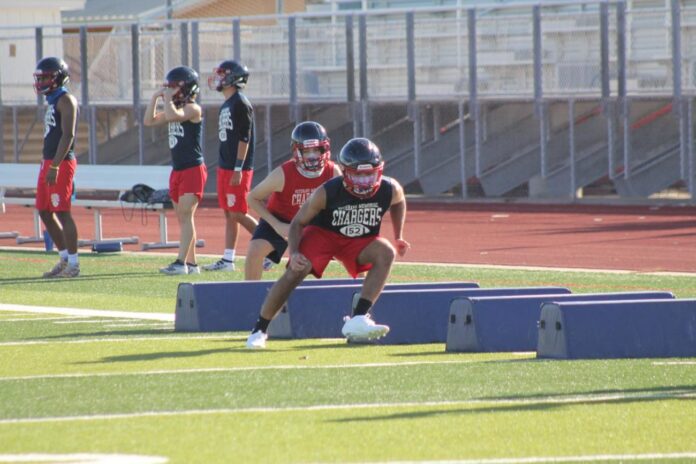 The Brownsville ISD Class 5A fall sports teams returned to their respective practice facilities to begin preparing for the 2020 season this week.

The Brownsville Veterans Memorial football team had its first practice Tuesday, and coach David Cantu and his athletes are excited and grateful for the opportunity, even if things will be a little different this year.

“(Tuesday) was like the first day of school when you’re in kindergarten, as far as the enthusiasm,” Cantu said at practice Wednesday. “It brings some normalcy to these boys’ lives, so we’re really thrilled about that. All the boys that we anticipated being here are here. Was that a little surprising? Yes. We did anticipate maybe some players opting out, but not any so far. It’s a pleasant surprise.”

Senior cornerback/free safety Diego Hinojosa said coming back to practice was “kind of a scary experience” since players are aware of the risks and knew some things would be different, but once he got back in the swing of things with his teammates, he said it just felt good to be back.

“You come out here, you’re excited to see all the guys, but you can’t be that close and you have to follow regulations. But overall, it’s just been really exciting getting back to the field and getting to play with everybody,” Hinojosa said. “It’s mostly just getting acclimated. Wearing a mask during practice, they say it doesn’t really affect you, but when you’re breathing with the fabric right against your mouth, it kind of does. But I think everybody’s doing a really good job (with the guidelines).”

Brownsville Veterans is having its football players wear their masks “100 percent of the time,” and Cantu said he’s pleased with how understanding the athletes have been with all the protocols in place. He said the Chargers have been focusing on character lessons, like appreciating the moment and accepting their role, and those lessons will come into play during this unusual season.

The Chargers will be fielding an especially young team that doesn’t boast many returning starters, but Hinojosa feels the depth at each position will make up for that. Also, he said the linebacker group, led by senior Gabriel Aleman, will be a big strength for the team.

Aleman recorded 78 tackles last year and is a player who Cantu thinks will have a productive season. Aleman said the strong bond the Chargers have will help them adapt to the challenges of the upcoming season, and he’s ready to step up for his team in his final year.

“It feels good and it’s real heartwarming, getting to get back out here and do what we love to do,” Aleman said. “All of us were anxious to get back. We have a group chat, and we were always texting each other. There’s a lot of motivation. We have to work hard, even harder than the past years.”

Quarterback Marlon Montelongo is another senior who Cantu expects to be instrumental this season. Cantu called him “a versatile athlete” and said his leadership, along with Hinojosa and Aleman, will have a big impact on the young team.

Montelongo said waiting for so long to find out if and when the Chargers would play again has given him a new appreciation for the game, especially heading into his final year, and he’s ready to give the team all he can. He thinks Brownsville Veterans will be strong running the ball and said junior running back Jose Moreno will be “a tremendous help” offensively, but he thinks the passing game might surprise some people, too.

“I know we’re playing a few less games, but the goal is still the same — to make the season longer,” Montelongo said. “The expectations are the same every year, which is to win games, but I think trying to make the most out of it is big this year. It’s a blessing that we get to play, so that’s a big goal, too, just make the best out of it. We’ve got a relatively young offense. People aren’t going to expect too much from the pass, but we’re going to make it work and it’s going to be great.”

Cantu said Moreno is one of only two players to earn varsity playing time as a freshman in the nine years he’s been with the program, and said the player has “a natural ability to run the ball well.” Slot receivers Angel Ramirez and Nathan Fernandez and defensive pieces Daniel Chapa, Jorge Alvarado and William Wassen are other players to watch.

“It’s all about being competitive,” Cantu said. “We never talk about wins or losses, we talk about the scoreboard taking care of itself. We feel like this team is definitely going to be competitive. These kids, in my opinion, are going to rise up and get it done.”