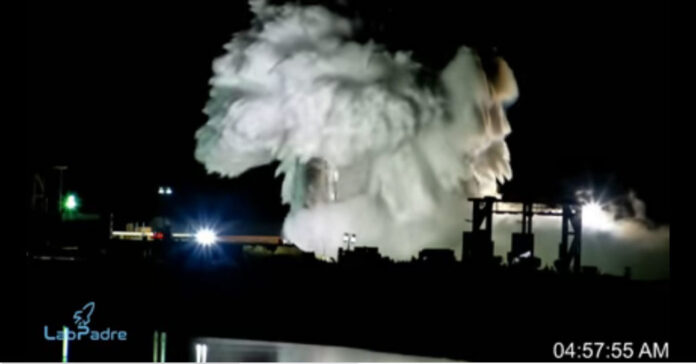 It was done on purpose, the pressurization-to-pop test conducted as the latest step in the company’s Starship development program at Boca Chica, which has seen two successful test flights to 500 feet since early August by Starship prototypes SN5 and SN6, as well as an intentional pressurization-to-rupture of an earlier SN7 tank version over the summer.

The next big event, according to SpaceX CEO Elon Musk, will be a much higher flight by a much more powerful prototype, the SN8, construction of which is nearing completion if not already finished. While SpaceX’s three previous flights at Boca Chica have involved one-engined prototypes, including the first, Starhopper, which flew to 500 feet in August 2019, the SN8 will be fitted with three SpaceX Raptor engines, according to Musk.

“Static fire” refers to the engine ignition test that takes place before each flight. Each prototype so far has launched and landed with the engine lit the entire duration of the flight, all of them lasting under one minute. With the SN8, however, SpaceX will attempt its “belly flop” method of reentry with a Starship prototype for the first time. It entails shutdown of the engines once altitude is reached, surfing the atmosphere more or less parallel to the ground, its attitude controlled by moveable aero surfaces (flaps), then last-minute re-ignition of the engines as the bottom swings down just in time to meet the Earth.

Success is not assured, though SpaceX’s Starship construction complex is crowded with nosecones and other components of subsequent prototypes SN9, SN10 and so on, which will soon be ready for testing.

“One way or another, excitement guaranteed!” Musk tweeted Sept. 12 regarding the SN8 launch. “Support of greater Boca, Padre, Brownsville community is very much appreciated.”

In addition to the successful flights, the highly experimental Starship development program has witnessed multiple failures, including the destruction of the first full-size prototype, the Mk1, on the launch pad eight days before Thanksgiving last year, and the fiery explosion of the SN4 on the test stand May 29. Musk’s goal in all of this is to develop a rapidly reusable Starship and Super Heavy booster system to carry humans to the Moon and Mars, which he believes is essential to ensuring survival of the species.

His aim is to eventually build hundreds of Starships and Super Heavys, with some portion of those to be built at Boca Chica. Musk said during a virtual Humans to Mars Summit on Aug. 31 that the first orbital Starship test flight from Boca Chica will probably take place next year, though much testing has to be done before a Starship ever goes aloft with crew or passengers.

“We’ve got to first make the thing work, automatically deliver satellites, and do hundreds of missions with satellites before we put people on board,” Musk said during the conference.