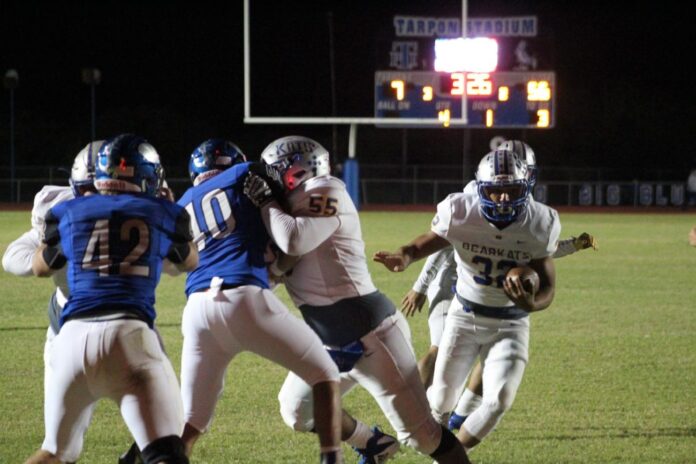 The Port Isabel athletic department announced Tuesday that it is postponing the start of fall sports until Oct. 12.

Port Isabel athletic director and football coach Tony Villarreal said the decision was made after the Tarpons received approval from Dr. Susan Elza, director of athletics for the UIL, late Monday to forgo strength and conditioning upon return to fall athletics.

The UIL told Port Isabel that doing two consecutive weeks of virtual workouts would suffice as a substitute for the week of strength and conditioning mandated for those schools that didn’t offer programs in the summer. Since the Tarpons have been doing virtual workouts since Aug. 3, their teams can jump straight into practicing Oct. 12, and the delayed start doesn’t affect their ability to compete.

“It doesn’t change anything other than we’re starting a little later because we have a little wiggle room. We get an opportunity to stay a little safer a little longer, so that’s what we’re doing,” Villarreal said. “(Football will) go straight into helmets and shorts, then the next week you have full pads. It’s almost like a spring training, if you will. UIL allows you to do spring training for four weeks, so that’s kind of how we’re treating it. Just trying to get as much as we can out of it.”

The Tarpons have one confirmed contest on their football schedule, which is their only District 16-4A Division II game of the season against Raymondville on Nov. 6. The winner of that game will advance to the playoffs as the No. 3 seed in the district. Villarreal said Port Isabel is looking for a non-district game to play Oct. 30, a date that was vacated when Rio Hondo’s chances at a football season ended last week.

Port Isabel’s volleyball, cross country and team tennis programs compete in District 32-4A. Villarreal said those teams “are looking at a reduced or abbreviated schedule also.”

Lady Tarpons volleyball coach Julie Breedlove said the 32-4A teams — Port Isabel, La Feria, Raymondville, Hidalgo and Grulla — are “back to square one” in terms of not knowing what their district schedule will look like. They had a two-round schedule set, but with Rio Hondo not taking the court this season and Port Isabel starting later, they’re back to waiting for decisions from the district executive committee.

“We had a schedule with all six of us starting play on Oct. 3, with a game that Saturday and, for the next three weeks, three games a week,” Breedlove said. “I don’t know when the DEC is going to meet or where they’ll go with our schedule. (Playing one round or two) will be something the DEC has to talk about. That’s just kind of where we are.”