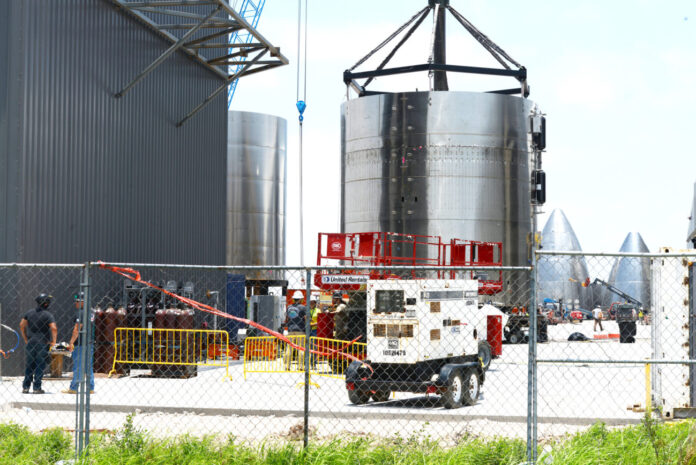 SpaceX is close to its first attempted hop of a full-size Starship prototype, according to Elon Musk, the company’s founder and chief executive.

In reply to a Twitter questioner on July 21, Musk said the Boca Chica team will try to launch the Starship SN5 prototype to 500 feet “later this week.” However, successful “wet rehearsal” fueling, pressurization and static fire engine tests have to come first. SN5 was transported from the company’s rocket construction yard to the launch pad on June 24, and in recent days a handful of pressurization tests were begun and quickly aborted.

Cameron County’s closures for S.H. 4 near the launch/test site were canceled, signaling further delays, though a new round of closures was announced for July 25-27 from 8 a.m. to 8 p.m., even with Tropical Storm Hanna bearing down on the Central Texas Gulf coast.

On July 25, the primary closure date, Category 1 Hurricane Hanna made landfall in the early afternoon near Port Mansfield, which is little over 40 miles north of the launch site as the crow flies, with rain and winds of 25-35 mph forecast for Brownsville.

Boca Chica Beach is closed through Aug. 10 by order of the county as part of its emergency management effort to prevent large gatherings and get control of the COVID-19 outbreak.

The first and last time SpaceX flew anything bigger than a drone at Boca Chica was on Aug. 27, when the diminutive test vehicle Starhopper flew to 500 feet and landed successfully in a flight lasting just over 57 seconds. Since then, the company’s first full-size Starship prototype, the Mk1, ruptured during a cryogenic fuel pressurization test designed to simulate the extreme cold conditions of space. The next prototype, SN1 (SN stands for “serial number”) likewise ruptured during testing.

SN2 passed a series of pressurization tests but was retired for testing of SN3, which was lost due to a “test configuration error,” according to Musk. Next up to bat was SN4, which aced a series of pressurization and engine tests over several weeks in preparation for a 500-foot test hop, though the craft was destroyed in a May 29 explosion caused by a leaky quick-disconnect fuel hose, part of the ground support equipment. On the day before the mishap, the Federal Aviation Administration granted SpaceX a two-year license to conduct suborbital Starship testing at Boca Chica.

Repairs were made to the launch/landing area and now all eyes are on SN5. Meanwhile, the construction yard continues to spawn multiple stainless steel nosecones and fuselage segments for subsequent Starship prototypes at an accelerated pace. A towering vehicle assembly building that could house construction of the Starship’s Super Heavy booster stage is nearing completion, and a new pad is being poured in the launch area, a stone’s throw from Boca Chica Beach and 1.6 miles east of the build yard. An FAA Temporary Flight Restriction prohibiting air traffic in the area around Boca Chica remains in effect through midnight on Aug. 5.

SpaceX is concentrating its Starship development program at Boca Chica. Musk is counting on the Starship spacecraft and Super Heavy booster to carry passengers to Earth destinations and, eventually, on missions to the Moon and Mars. His ultimate goal is to make humankind an interstellar species in order to ensure survival of the race. SpaceX broke ground on the Boca Chica site in 2014.