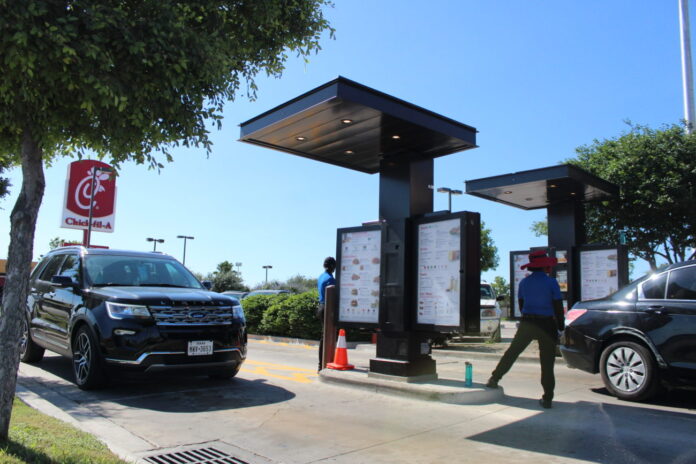 The University of Texas Rio Grande Valley had been looking to increase its presence in Brownsville following the momentum of a successful Western Athletic Conference championship last April at the Brownsville Tennis Center.

So before Spring Break, UTRGV athletic director Chasse Conque, along with City of Brownsville District 1 Commissioner Nurith Galonsky and Mayor Trey Mendez, began to have conversations with business owners and franchisees like Amanda Esquivel, the owner/operator of the Chick-Fil-A on Boca Chica Boulevard.

On Thursday, the restaurant offered free meals to UTRGV employees and student-employees as a token of appreciation.

“I’m actually an alumna of (the University of Texas-Pan American), and I taught there as well, so UTRGV is obviously very close to my heart,” Esquivel said. “When I was presented with this opportunity to be a partner with UTRGV Athletics in Brownsville, I thought that was great.”

But then the COVID-19 coronavirus pandemic’s impact on the Rio Grande Valley and its workforce began to take shape, and the two parties knew they would have to be creative about finding ways to give back to the community.

“UTRGV and the staff are working hard to keep the students on pace to graduate or on pace to start school again in the summer,” Esquivel said. “They’re just figuring out ways to make this all work, despite everything that’s going on. And so I thought, ‘Let’s do a little something for them as well.’”

Conque said the initiatives from UTRGV and the athletic department extend to last fall. He noted the additional outreach in Brownsville and Cameron County has been a priority for him, and the school’s coaches and student-athletes.

“We’re extremely grateful to Chick-Fil-A Boca Chica and (Esquivel),” Conque said. “We’ve had numerous conversations even before we met the folks at Chick-Fil-A with Mayor Mendez, (Brownsville city manager Noel Bernal and director of government and community affairs Ramiro Gonzalez).”

Conque said Brownsville Sports Park could serve as a venue for UTRGV soccer camps and exhibitions, and that soccer and tennis are activities that the university hopes to promote in the near future.

“We would love to have the opportunity to bring soccer to the Lower Valley and the Brownsville community,” Conque said. “From a basketball standpoint, we really want to do things (during the) preseason with youth camps and fan days. Those are some of those discussions we’ve been having. Really, it’s been looking at all of our sports from our students’ perspective to involve them, but also from a community perspective.”

In December, a meeting at City Hall featured six UTRGV coaches and Galonsky, among others, about how to build partnerships between the city and the university.

When the pandemic stalled some of the momentum the two parties had built after a series of meetings and collaborations, Esquivel reached out a few weeks ago to see how she and her staff could lend a hand.

Esquivel said her team of employees volunteered with United Way and food banks in the city last week, and is continuing those efforts this week.

She also noted that while the initial phase of reopening businesses as ordered by Texas Gov. Greg Abbott goes into effect May 1 and will allow restaurants to seat up to 25 percent of its dine-in capacity, the dining room at the Boca Chica location will remain closed to the public. It will continue to serve customers via curbside pickup, drive-thru orders and home delivery.